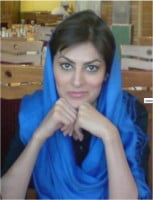 Committee of Human Rights Reporters – Shiva Nazar Ahari, a human rights activist was sentenced to 4 years imprisonment, exile to a prison in Karaj, and 74 lashings by the 36th Branch of the Appeals Court.

Shiva Nazar Ahari had previously been sentenced to 6 years imprisonment at Izeh Prison and 76 lashings.  She was acquitted today of one of her charges, namely “colluding and conspiring against the regime” and as a result her sentence was reduced to 4 years in prison and her exile location was moved from Izeh to one of the prisons in the city of Karaj.

Shiva Nazar Ahari, former Secretary of the Committee of Human Rights Reporters (CHRR) was arrested on December 20, 2009, when she was on her way to attend the funeral service of Ayatollah Montazeri. Nazar Ahari was released on September 18, 2010, after almost one year in prison and three months of solitary confinement on approximately $500,000 bail.

The judge told my husband Jafar Kazemi: “We should have executed you back in the 1980’s” Coordination Committee member Khaled Hosseini arrested

On 3rd of January a news spread in social media regarding Qasem Soleimani and AbuMahdi Mohandes who has died by a US drone strike near Baghdad Airport and this was the end of their lives. In social media, especially Iranian users, there was a chaotic situation, some called of “the general of... END_OF_DOCUMENT_TOKEN_TO_BE_REPLACED