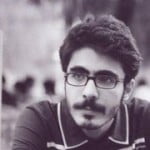 Branch 15 of the Revolutionary Court issued its sentence for Ali Akbar Mohammadzadeh, student activist at Sharif University who has spent the last few months behind bars in Evin prison. In accordance to Penal Code 510 and 600, he was charged with “illegal assembly” and “propaganda against the regime.”

According to Human Rights House of Iran, 5 years were handed down for “illegal gathering and collusion” and another year for “’propaganda against the regime.”

Ali Akbar was in court without his original lawyer, Saleh Nikbakht who was not able to be present at the court due to the date of the trial being changed. Court officials had told Saleh Nikbakht to be present at court at the end of the week, but they postponed the court 48 hours followed by another 34 hours. During this time, he was not allowed to review the files of his client. Therefore Ali Akbar’s family had no alternative but to change lawyers and use a new lawyer at the court session.

Ali Akbar’s sentence was announced 50 days after his trial and it has been appealed by Mohammadzadeh and his lawyer. The date of the appellate court session is not known.

Even though Mohammadzadeh’s activities were in the university, Judge Salavati insisted that Ali Akbar confess to taking part in activities outside of his school and the judge attached additional charges during Ali Akbar’s trial. Among those allegations are that he participated in illegal off-campus gatherings.

Ali Akbar Mohammadzadeh, Secretary of the Students Islamic Association of Sharif University of Technology, was beaten up by security forces and violently detained across his university on February 15, 2011. During the past 2 years, this student activist had been summoned, threatened and interrogated several times by the Office of the Ministry of Information.