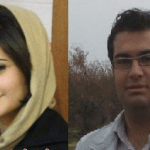 Ali Yazdanpanah and Sara Bagheri were arrested when exiting the university by the security forces. They have been transferred to an undisclosed location and the reason for their arrest is unknown.

Iman Sadighi, the political secretary of the Islamic Student Association of Noushiravani University of Technology, was also arrested on February 20th.