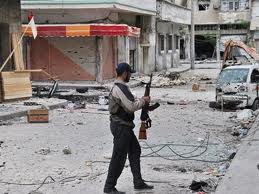 An independent panel of experts has informed the UN Security Council that Syria is involved in nearly all breaches of UN sanctions against Iran. UN experts have reportedly gathered “substantial evidence” regarding Syria’s role in arms transfers with Iran. Reports indicate that the UN sanctions panel on Iran prepared a report which outlined three illegal arms shipments, two of which involve Syria. This report is expected to be published in the near future.

During a UN Security Council meeting on the Iran sanctions, US Deputy Permanent

Representative to the UN, Rosemary DiCarlo, said “over the last two years, the panel has assembled substantial evidence proving Syria’s role as a repeat violator of UN sanctions on Iran” adding “Syria’s refusal to implement its UN obligations should be a matter of central concern to this council.”

For his part, French Permanent Representative to the UN, Martin Briens, stressed that “Syria, which brutally represses its people, is implicated in most of the cases of violations of the arms embargo notified to the committee.”

He added “the scope confirms the existence of a deliberate and continued policy of illicit transfers of arms and connected materials between Iran and Syria.”

France’s Permanent Representative to the UN also claimed that “Syria is also implicated in numerous cases notified to the North Korea sanctions committee” stressing “these are grave violations by the country.”

The US and its western allies are calling for tighter sanctions on Iran over its on-going nuclear ambitions which Tehran claims are peaceful but which Washington and others believes represents an attempt to develop a nuclear bomb.

An independent panel of experts recommended that the UN Security Council’s Iran sanctions committee add two Iranian companies to a UN blacklist for violating the UN ban on arms exports by Tehran.

This recommendation to sanction Iran’s “Yas Air” and “SAD Import-Exports” was included in a confidential report issued by the UN panel of expert. UN Security Council diplomats revealed that this report will be published in the near future.

This report claims that Syria remains the top destination for Iranian arms shipments in violation of the UN Security Council ban on weapons exports by the Islamic Republic of Iran.

For his part, Britain’s Deputy Permanent Representative to the UN, Philip Parham, told the UN Security Council that London supports the panel’s recommendation of sanctioning the two Iranian firms.

Speaking during a meeting on the UN’s sanctions committee for Iran, Parham said “Iran continues flagrantly to violate this council’s resolutions” adding “we support the two clear designation proposals, Yas Air and SAD Import/Exports, for their respective roles in illegal Iran arms exports.”

It was not clear when the Iran sanctions committee would make a decision on whether to add Yas Air and SAD Import/Exports to the list of companies facing an international asset freeze and banishment from international business.