Tehran residents speak up about protests and opposition movement 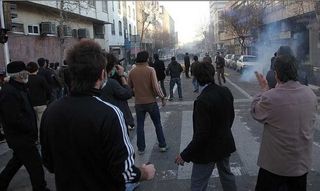 What do Iranians think about the confrontation between pro- and anti-government forces that continues to dominate the country’s political discourse?

Babylon & Beyond spoke to people on the streets and in the mosques of Tehran to canvas opinion about recent protests in the Iranian capital, the opposition movement and its leaders.

Those interviewed also were asked whether they thought protests might escalate or were losing momentum.

“The demonstration on March 1 was in Engelab and Azadi avenues and they were more than I had expected. But the difference was the plainclothes police who were among the groups of demonstrators. … As soon as [the protesters] dared to chant slogans, they were arrested and taken away to the waiting buses. I have watched videos … about the demonstrations in Shiraz and Isfahan and other cities. The demonstrations will be escalating if the suppressive militia lets up and is a bit lenient.”