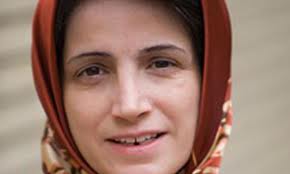 Reza Khandan announced that today, Sunday August 7, 2011, when he and his family went to prison to visit his wife, Nasrin Sotoudeh, not only did the prison authorities bar them from seeing her, they were all detained and held for several hours. Nasrin’s husband, sister, and two young children were held in prison until the afternoon.

According to Kalame, Khandan stated, “the excuse for our arrest was that they demanded to search our personal belongings which we refused and demanded a search warrant from a judge.”

Nasrin Sotoudeh, human rights activist and lawyer, is the mother of 4-year-old Nima and 11-year-old Mahvareh. She has been held behind bars since her arrest on September 4th, 2010.

Rouhani’s Speech to the IRGC Convention: Handing Over More Power to IRGC Than Ahmadinejad.

Iran accused at UN of shipping weapons to Syria