The Long Shadow of the Guards

Posted By: on: December 17, 2013In: Intelligence Ministry, IRGC, IRGC Military Branches, Politics, Who is WHO in IRGC
Print Email 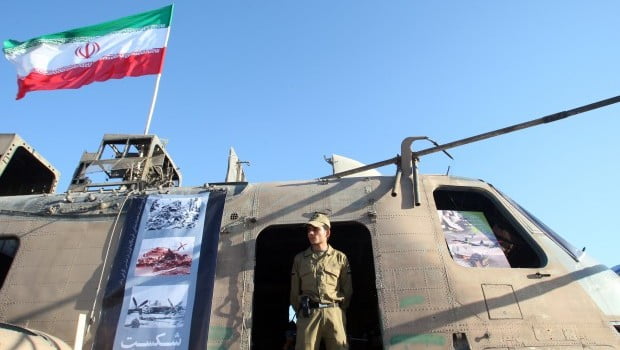 A member of Iran’s elite Revolutionary Guard stands under a national flag on the wreckage of a captured US air force CH-53 Sea Stallion helicopter during a ceremony in Tehran’s Azadi (Freedom) Square on April 25, 2010. (ATTA KENARE/AFP/Getty Images)

A member of Iran’s elite Revolutionary Guard stands under a national flag on the wreckage of a captured US air force CH-53 Sea Stallion helicopter during a ceremony in Tehran’s Azadi (Freedom) Square on April 25, 2010. (ATTA KENARE/AFP/Getty Images)

This week saw further clashes between the two rival power centers vying for influence over Iranian foreign and domestic policy. In one corner stands a faction dedicated to rehabilitating Iran’s international standing, epitomized by Foreign Minister Mohammad Javad Zarif. An urbane statesman, Zarif leads the nuclear negotiations and is the most effective instrument President Hassan Rouhani has in his struggle to improve Iran’s relations with the West. In the other corner stands Major General Mohammad-Ali Jaafari, commander of the 125,000-strong Islamic Revolutionary Guard Corps (IRGC). Where Zarif is the public face of an increasingly constructive Iranian diplomatic strategy, Jaafari leads a revolutionary vanguard controlling a vast network of economic interests in Iran, both legal and illegal. Powerful at home and abroad, the Guards’ Quds Force is responsible for most of Iran’s covert action across the Middle East. Its leader is the shadowy Major General Qassem Suleimani, recently described by former CIA officer John Maguire as “the single most powerful operative in the Middle East today.”

Since Rouhani’s election this summer, the Guards have pushed back against his attempt to steer Iranian foreign policy towards a more moderate and conciliatory path. Relations between Rouhani and the Guards are now at their lowest point. The three areas of conflict, at least in terms of foreign policy, are the nuclear negotiations, relations with America, and Syria. While most Iranians have welcomed the interim nuclear deal reached in Geneva, Jaafari immediately voiced his skepticism that the West would negotiate in good faith, and issued a strong warning that the government must stand strong against the “enemy’s excessive demands.” Before that, Jaafari harshly criticized Rouhani’s willingness to speak to US President Barack Obama on the phone. In his most recent intervention, he went further, accusing Rouhani of being under the influence of Western ideas. Underlying this conflict is a basic disagreement on the West’s intentions and the Islamic Republic’s capacity to resist external pressure.

offered by Iran, considerable as they were, but how US and Iranian diplomats seem to have finally persuaded each other of their good intentions. No such progress can be expected with Jaafari or his ilk. Unlike Rouhani, the IRGC war veteran has not lived comfortably in the West and is hardened by his experiences during the Iran–Iraq War. From his perspective, the West, and particularly America, is the enemy; it can only be relied on to undermine Iran and its revolutionary identity. More importantly, Jaafari holds to the ‘resistance’ narrative that Rouhani explicitly campaigned against. While Rouhani sees concessions as a tactical necessity, Jaafari believes they are neither warranted nor necessary. Whenever Iran is united, the IRGC commander asserted this week, “the enemy has been forced to retreat and, despite all claims of its power, has not been able to do a damn thing.”

Rouhani and his negotiating team will not capitulate to Western demands, but they take their threats far more seriously. Since being elected, Rouhani has been at pains to explain both to Supreme Leader Ali Khamenei and the Iranian public the grave danger facing Iran’s economy. Reaching a compromise on the nuclear issue with the primary aim of gaining sanctions relief is couched as a national security priority. Nor does his inner circle dismiss the threat of military action. In an off-the-cuff remark that drew a sharp rebuke from Jaafari and other hardliners, Zarif recently acknowledged that America could wipe out Iran’s military defenses if it so wished.

Both camps have also struck very different tones when it comes to policy in Syria. Jaafari is resolute that Iran must stick with President Bashar Al-Assad, and stated this week: “We will do whatever we can and is necessary to protect Syria because Syria is the front line of the Islamic Revolution.” The Rouhani government, however, is conscious of the enormous damage Iran’s support for the brutal Alawite regime has inflicted on relations with Sunni neighbors, particularly the Gulf Arabs. The support his government offers is therefore far more circumspect. When asked this week if Iran would stick with Assad, Rouhani insisted that his country was not wedded to individuals and would only “stick to the side of stability and resolution.”

In one important respect the interests of the two factions coincide: the Guard’s economic activities have been hit hard by the effect of sanctions, and Rouhani has dedicated his foreign policy to rolling them back. Rouhani has even publicly praised the Guards’ economic might and shows no inclination towards challenging their creeping wealth. Instead, what is at stake is the source of that power–political influence, access to the Supreme Leader, and ideological leadership. And on this front, Rouhani has mounted an unprecedented challenge to the IRGS. Back in September, he warned the Guards’ leadership, to their face, that they should keep out of politics. When Khamenei immediately added that Iran’s revolutionary vanguard had no need to involve themselves in politics, it was a clear instruction for IRGC hardliners to rein in attacks against the President. Another indication of Rouhani’s determination to reduce IRGC political influence is the lack of representation it has in his cabinet. In stark contrast to the previous administration, where 60% of the cabinet were IRGC commanders, Rouhani’s 18-strong cabinet contains just four. Rouhani recently backed this up by purging members of the Guards from political positions in Iran’s provinces.

Whether Rouhani succeeds politically will largely depend on whether he continues to enjoy the patronage of the Supreme Leader. That remains far from certain. Khamenei may well have become wary of the growing power of the IRGC, particularly during the Ahmadinejad years, but he knows their members are by and large fiercely loyal to him. Equally, Khamenei’s view of the West is far closer to Jaafari’s than it is to the likes of Zarif. He will want to see concrete steps from the West towards removing sanctions in response to the concessions he has authorized. Khamenei is also concerned that Rouhani might be pushing domestic reform too far, and very publicly rejected attempts to liberalize cultural policy. Even more worrying is the level of public expectation Rouhani faces to deliver significant improvements in living standards. If he fails to reverse Iran’s economic woes—a daunting task—and the government is stripped of its popular appeal, Khamenei is far less likely to continue protecting his president from hard-line opponents. It’s no wonder, therefore, that Rouhani and his chief lieutenants reacted so strongly to the threat of further Congressional sanctions that will inevitably undermine their ability to sell a nuclear deal at home. Iranian foreign policy has always been closely linked to the fortunes of powerful domestic factions, but failure on the nuclear issue could now frustrate Rouhani’s attempt to reduce the political position of a hard-line faction accustomed to wielding considerable influence.

All views expressed in this blog post are those of the author and do not necessarily represent the views of, and should not be attributed to, The Majalla magazine.

Barak: A nuclear Iran is taking shape before us. Time for decisions is short