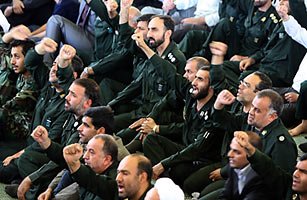 The shadowy Revolutionary Guards already oversee a 130,000-strong parallel army and run large swatches of Iran’s economy, from dentist clinics to the country’s controversial nuclear program. But signs have emerged in recent weeks that the élite military arm isn’t satisfied: it may just want to run the entire Islamic republic.

The Islamic Revolutionary Guards Corps (IRGC), or Sepah for short in Farsi, is widely believed to have played a large role in orchestrating the crackdown on political dissidents and protesters following the disputed presidential election. Its political influence within the regime has always far exceeded the actual army’s, and it has increased exponentially since President Mahmoud Ahmadinejad was elected to office in 2005. But the speculation among Iranian opposition sources is that, these days, the IRGC’s powerful patron — whose second term officially began last week — has now become its puppet, falling under the influence of a gang of security chiefs (the so-called New Right) that harbor schemes to further radicalize the regime or topple it in a military takeover. (What’s ahead for Iran’s protesters?)

The IRGC’s maneuvering has been quite public. On Aug. 9, it was a top Revolutionary Guards commander who escalated the ongoing confrontation with the opposition leadership by calling for their arrest. “What is the role of [former President Mohammed] Khatami, [former Prime Minister and presidential candidate Mir-Hossein] Mousavi and [presidential candidate Mehdi] Karroubi in this coup?” asked Yadollah Javani, the organization’s political chief, referring to the alleged plot by the opposition to subvert the regime by way of protests. “If they are the main agents, which is the case, judiciary and security officials should go after them, arrest them, try them and punish them.” (See pictures of the turbulent aftermath of Iran’s election.)

The same day, reports trickled out that, following Ahmadinejad’s dismissal of the Intelligence Minister late last month, as many as 20 officials in the ministry who disapproved of the public airing of confessions by political dissidents were purged, including the deputy minister and chief of counterintelligence. The move, according to Hassan Younesi, the son of a former Intelligence Minister, was engineered by Hussein Taeb and Ahmad Salek, two top Guards commanders. “Never has the Intelligence Ministry witnessed such a politically motivated purge since its establishment,” Younesi wrote on his personal blog.

Meanwhile, the IRGC has been cleaning house. According to an opposition adviser who maintains close ties to the Guards leadership, at least five commanders sympathetic to the reformists were put under house arrest in the aftermath of the election. These purges within Iran’s security apparatus consolidated power in the hands of the top Guards commanders, who form a united hard-liner bloc that is opposed to reconciliation with the opposition or the West. The IRGC, then, is the most effective power bloc in the country, certainly more cohesive in its top leadership than the conservative political faction, which has seen spats between the Supreme Leader, Ayatullah Ali Khamenei, and Ahmadinejad. The Revolutionary Guards leadership has a vested financial interest in isolating the Islamic republic from the West — and focusing its sights eastward toward places like China. Indeed, some observers believe the IRGC’s economic functions may eventually turn it into an entity like South Korea’s government-supported chaebol or multinational conglomerates that were key to that country’s modernization, albeit in controversial ways.

While Ahmadinejad has always had close ties to the Revolutionary Guards — 14 of his 21 ministers in his first-term cabinet were said to have been veterans of the force — his current position suggests that it is now he who must pay homage to the Guards. When he appointed a seemingly moderate in-law as his Vice President last month, in defiance of the Supreme Leader, the Revolutionary Guards quickly put him in his place, warning that his political future was “dependent on his acceptance of velayat-e faqih [or rule by the clergy, the founding tenet of the Iranian theocracy and the chief pillar of the Supreme Leader’s power].” Some members of the opposition, already worried that the IRGC is writing the script current events, wonder if the Guards did not pre-plan the entire crackdown. They point out that four days before the presidential election, the Guards’ weekly newspaper, Sobhe Sadeq, warned of a “Velvet Green revolution” and said the IRGC would never permit the opposition movement to come to power.

Opposition members are drawing nightmarish parallels with a neighboring country. In 1977, a disputed election in Pakistan set off widespread street demonstrations and a show trial that ultimately led to the execution of the Prime Minister. In the end, that government was toppled by a military coup led by a general who would rule for a decade with the help of a shadowy security apparatus. Could something similar happen in Iran?

See pictures of people around the world protesting Iran’s election.