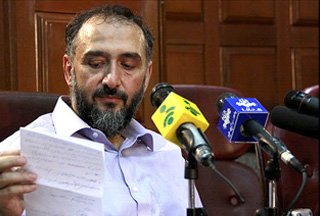 The post-vote trials have been mocked by the opposition as a “sham.”
After court confessions in post-vote Iran stirred up controversy, a senior official with the Islamic Revolution Guards Corps (IRGC) says those urging the release of protesters seek to conceal the truth behind the recent turmoil.
Brigadier General Yadollah Javani, head of the IRGC’s political bureau, said the authorities should make every effort to resolve the recent ambiguities in the country.Amid the turmoil following the controversial June 12 presidential election, Iranian authorities escalated their confrontation with the country’s opposition.

Nearly 200 political activists and protestors were put on trial on charges of conspiring with foreign powers to stage a “velvet coup d’etat” using terrorism, subversion and a mass campaign to undermine the disputed vote.

The opposition and their supporters have condemned the trials as a “sham”, arguing that the detainees’ confessions lack credibility as they may have been forced.

Many insiders have criticized the government for its handling of the controversy over the election, saying the release of post-vote detainees is the way forward to settling the ongoing dispute.

Among them is influential cleric Ayatollah Akbar Hashemi Rafsanjani who in a Friday prayer sermon said, “It is not necessary that in this situation people be jailed. Let them join their families.”

The IRGC official on Monday questioned the motive behind making such comments by a Friday prayer leader.

“The question is if they had been released how Mr. [Mohammad-Ali] Abatahi would have confessed that the term ‘fraud’ was the code word for rioting … and [how] Atrianfar [would have] said that ‘we sought to change the system’,” Brig. Gen. Javani said.

The fourth hearing of the post-vote trials is scheduled for August 25.

Four Baha’i citizens were tried and sentenced in Mashhad