Tortured Iranian blogger buried amid calls for probe into death

The Paris-based rights group Reporters Without Borders says it is “deeply shocked” by the death of Iranian blogger and activist Sattar Beheshti, who is believed to have died under torture a week after being detained by Iran’s cyber police.

the “international community not to allow this crime to go unpunished.”

“The Tehran government is an egregious example of the triumph of impunity ,” the group said. “Up to now, no-one responsible for the deaths in detention of any journalists or netizens has been brought to justice.”

RWB also called for the UN’s special rapporteur on the situation of human rights in Iran, Ahmed Shaheed, to be allowed entry to Iran in order to carry out his own independent investigation into Beheshti’s death and other similar cases of prisoner abuse.

The 35 year-old was arrested by Iran’s cyber police on national security charges on 30 October. After raiding his home and violently arresting the young activist, the security forces confiscated his personal belongings, including his computer and handwritten notes.

A week later, his family was told to receive his body and to prepare his mother for the news.

On Thursday, Kaleme, an opposition website close to Green Movement leader Mir Hossein Mousavi,published a copy of a letter of complaint it said Beheshti had written while being held in the notorious Evin Prison. According to the letter, which was addressed to prison officials, Beheshti was tortured during his interrogations.

The blogger and worker was from the city of Robat Karim, 25 kilometers southwest of the nation’s capital Tehran. He regularly posted articles critical of the Iranian government on his blog and was active on the social networking site Facebook.

The BBC’s Persian service says that Beheshti was laid to rest in Robat Karim’s main cemetery on Thursday. Security forces did not allow anyone but Beheshti’s brother-in-law to attend the funeral.

Since Beheshti’s death, his family have been under the pressure and surveillance of Iran’s security apparatus. They’ve also been ordered not to speak to the media about the death of the family’s only breadwinner.

Meanwhile, Mansour Haghighat-Pour, the Vice Chairman of the Iranian Parliament’s National Security and Foreign Policy Committee, told the semi-official news agency Ilna that case of Beheshti’s death did not meet the requirements for being investigated by his committee.

“If necessary, the relevant bodies will handle this case. The … Committee has not yet received any [official] reports about the issue.”

The following Images show Sattar Beheshti’s place of residence in Robat Karim. His picture hangs on the door of his house: 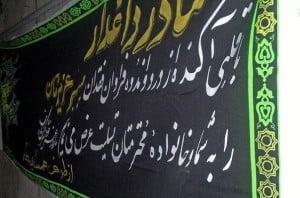