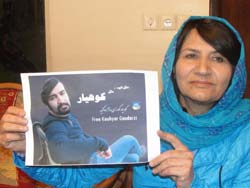 The Committee of Human Rights Reporters – The trial for Parvin Mokhtare, Kouhyar Goudarzi’s mother, was held in the Kerman Revolutionary Court last Tuesday, more than one month after her arrest and transfer to Kerman prison.

Parvin Mohktare has no history of civil or political activism; she had only defended Kouhyar Goudarzi. Nevertheless, she was unlawfully arrested on August 1st, a day after her son’s arrest. Her charges and what transpired in court have not yet been officially announced. The Judge in possession of her case file has however made reference to the interviews Parvin Mokhtare gave [to the media and human rights groups] about her son’s imprisonment [last year].

In a recent meeting in prison with her family Parvin Mokhtare said that, during her interrogation sessions, she was accused of many crimes, including, “Acting against national security” and “Disturbing the public”.

Several days ago news was published on the Internet regarding Parvin Mokhtareh’s release from prison, however the news was proven to be false. Parvin Mokhtare is still detained in Kerman prison.

Telephone contact and in-person visitation are the fundamental rights of a defendant, yet Kouhyar Goudarzi has been deprived of these rights. Judicial authorities have remained silent on the reason for his arrest and even the location of his detention. There are serious concerns regarding Kouhyar Goudarzi’s current condition and fate.