The United States issued on Thursday new sanctions against Iran, specifically against regime militia groups and an Iranian airline. 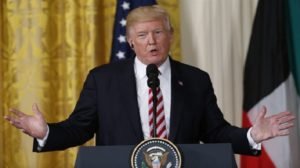 The U.S. Treasury Department announced that the Iran-backed Zaynabiyoun Brigade and the Fatemiyoun Division, both based in Syria, providing “material support” to the Iranian Revolutionary Guard Corps and should thus be sanctioned.

Additionally, Qeshm Fars Air, an Iranian airline allegedly linked to Mahan Air, which is already sanctioned by the United States and was banned in Germany this week, was also penalized.

“The brutal Iranian regime exploits refugee communities in Iran, deprives them of access to basic services such as education, and uses them as human shields for the Syrian conflict,” said U.S. Treasury Secretary Steven Mnuchin.

“Treasury’s targeting of Iran-backed militias and other foreign proxies is part of our ongoing pressure campaign to shut down the illicit networks the regime uses to export terrorism and unrest across the globe,” he said in a statement.

Sigal Mandelker, the U.S. Treasury’s Under Secretary for Terrorism and Financial Intelligence, said in a statement: “Iran continues to leverage Mahan Air and its commercial aviation sector to transport individuals and weapons needed to carry out this tragic campaign and to fuel sectarian conflict throughout the region. We are aggressively targeting those who continue to provide commercial support to Mahan Air and other designated airlines, and any who fail to heed our warnings expose themselves to severe sanctions risk.”

Under the Trump administration, the U.S. has been slapping on new sanctions, in addition to reimposing penalties that were lifted under the 2015 Iran nuclear deal that the United Stattes left in May 2018.