Trump Says Iran Is ‘Standing Down,’ Vows To Continue Pressure

President Trump said that Iran appears “to be standing down” after Tuesday night’s missile attack in Iraq and that “the American people should be extremely grateful and happy no Americans were harmed.” 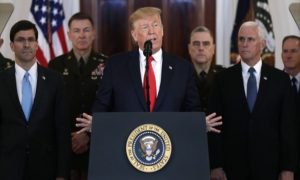 Trump Says Iran Is ‘Standing Down,’ Vows To Continue Pressure

Trump, in a nationally televised address from the White House, also announced a new round of what he termed “punishing economic sanctions” against the Iranian government. And he called on NATO to become “much more involved in the Middle East process.”

Later in the day, Trump spoke by phone with NATO Secretary General Jens Stoltenberg. According to a White House statement, “The President emphasized the value of NATO increasing its role in preventing conflict and preserving peace in the Middle East.”

The missile strikes against U.S. military and coalition forces in Iraq were in apparent retaliation for the killing of Qassem Soleimani, an Iranian military commander.

Soleimani “should have been terminated long ago,” Trump said, calling him “the world’s top terrorist.”

House Speaker Nancy Pelosi, D-Calif., announced that the House will vote Thursday on a measure that would limit Trump’s abilities to order a possible military strike against Iran. Democrats have argued that Congress should have been notified ahead of the U.S. strike that killed Soleimani in Iraq.

Trump essentially blamed the Obama administration, which reached an agreement limiting Iran’s ability to pursue nuclear weapons in return for — among other things — billions of dollars of Iranian assets that had been held by the U.S., for the Tuesday night missile strike.

“The missiles fired last night at us and our allies were paid for with the funds made available by the last administration,” he charged.

Trump withdrew from that 2015 agreement in 2018, and on Wednesday, he called on the nation’s European allies along with Russia and China to do so as well.

On 3rd of January a news spread in social media regarding Qasem Soleimani and AbuMahdi Mohandes who has died by a US drone strike near Baghdad Airport and this was the end of their lives. In social media, especially Iranian users, there was a chaotic situation, some called of “the general of... END_OF_DOCUMENT_TOKEN_TO_BE_REPLACED