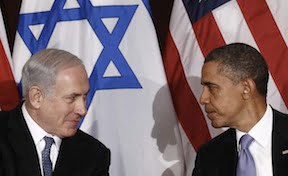 The United States and Israel are coordinated on steps being taken to combat Iran’s perceived nuclear threat and the two allies have been planning to ensure “all other options” are available, the U.S. ambassador to Israel said on Thursday.

Ambassador Dan Shapiro said both countries were hoping the economic sanctions in place would persuade Iran to abandon its nuclear ambitions, and they were having a “significant effect” but had not yet achieved their goal.

“It is clear that Iran is under significant economic strain … (but the sanctions have) not yet achieved the goal, which is to get that nuclear program stopped … for both us and for Israel this is the preferred strategy, to achieve that all-important objective,” he told U.S.-Jewish community leaders.

Shapiro added: “It’s also true, as the president has said … we are coordinated with our Israeli partners … that other options, all other options, are on the table to achieve that goal … the necessary planning has been done to ensure that those options are actually available if at any time they become necessary.”

Iran says its nuclear program is for peaceful purposes, although a U.N. nuclear watchdog mission ended in failure this week when the Islamic Republic denied officials permission to visit a site suspected of housing a facility to test explosives.

The failure of the visit by the officials from the International Atomic Energy Agency could hamper any resumption of wider nuclear negotiations between Iran and six world powers — the United States, China, Russia, Britain, France and Germany.

Shapiro said a constant stream of visits by senior U.S. officials to Israel and vice versa were ensuring both administrations remained coordinated on how to tackle Iran’s nuclear ambitions.

Israeli Prime Minister Benjamin Netanyahu will visit Washington early next month and will meet President Barack Obama on March 5 with Iran set to top the agenda.

The Obama administration has shown signs of being increasingly concerned about the lack of any assurance from Israel it would consult Washington before launching strikes on Iran’s nuclear sites.

But Shapiro indicated U.S.-Israel coordination was intimate and productive.

“It’s the kind of dialogue, I assure you, you would want two allies facing a common security challenge to be having. It is that quality, it’s that detail, it’s that (intimacy) and it’s exactly what should be happening. It will continue when Prime Minister Netanyahu visits Washington,” Shapiro said.

Iran continues its crackdown on journalists and workers

Reformist MPs call for probe into death of jailed journalist

The commander of Ammar Base threated Saudi to collapse

Court Officials to Families of Ali Saremi and Reza Sharifi Boukani: “Why Are they Still Alive?”