A secret cyberattack against Iran in June wiped out a critical database used by Iran’s paramilitary arm to plot attacks against oil tankers and degraded Tehran’s ability to covertly target shipping traffic in the Persian Gulf, at least temporarily, according to senior American officials. 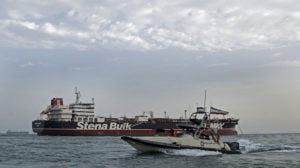 Iran is still trying to recover information destroyed in the June 20 attack and restart some of the computer systems — including military communications networks — taken offline, the officials said.

Senior officials discussed the results of the strike in part to quell doubts within the Trump administration about whether the benefits of the operation outweighed the cost — lost intelligence and lost access to a critical network used by the Islamic Revolutionary Guards Corps, Iran’s paramilitary forces.

The United States and Iran have long been involved in an undeclared cyberconflict, one carefully calibrated to remain in the gray zone between war and peace. The June 20 strike was a critical attack in that ongoing battle, officials said, and it went forward even after President Trump called off a retaliatory airstrike that day after Iran shot down an American drone.
Sign Up for On Politics With Lisa Lerer
A spotlight on the people reshaping our politics. A conversation with voters across the country. And a guiding hand through the endless news cycle, telling you what you really need to know.
SIGN UP
Iran has not escalated its attacks in response, continuing its cyberoperations against the United States government and American corporations at a steady rate, according to American government officials.

American cyberoperations are designed to change Iran’s behavior without initiating a broader conflict or prompting retaliation, said Norman Roule, a former senior intelligence official. Because they are rarely acknowledged publicly, cyberstrikes are much like covert operations, he said.

On 3rd of January a news spread in social media regarding Qasem Soleimani and AbuMahdi Mohandes who has died by a US drone strike near Baghdad Airport and this was the end of their lives. In social media, especially Iranian users, there was a chaotic situation, some called of “the general of... END_OF_DOCUMENT_TOKEN_TO_BE_REPLACED