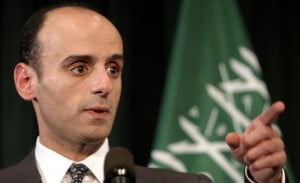 A U.S. grand jury decided on Thursday to formally charge two men suspected of being part of an alleged Iranian plot to kill the Saudi ambassador to Washington.

U.S. authorities announced last week they foiled a plot by two men linked to Iran’s security agencies to assassinate Saudi Ambassador Adel al-Jubeir. One suspect was arrested in the United States last month and the other is believed to still be in Iran.

The indictment was in line with the initial complaint against Manssor Arbabsiar, who is in custody, and co-defendant Gholam Shakuri, who is at large, the prosecutor’s office said.

Iran has strongly denied any involvement in what the U.S. says was a plot by the Iranian Revolutionary Guards’ elite Quds force to kill the ambassador by hiring assassins from a Mexican drug cartel for $1.5 million.

Authorities in the United States say the plot involved Arbabsiar allegedly trying to contract a Mexican drug cartel to kill the Saudi ambassador possibly through the bombing of a Washington restaurant.

To set up the alleged hit, Arbabsiar allegedly arranged for the wiring of $100,000 to the United States as a downpayment, the indictment says.

The two co-defendants are also accused of planning for a “weapon of mass destruction” to be used against the ambassador, creating “substantial risk of serious bodily injury to others by destroying and damaging structures.”

The affair has escalated tensions between the United States and Iran, relations poisoned by decades of mutual suspicion and more recently Western concerns over Iran’s nuclear program.