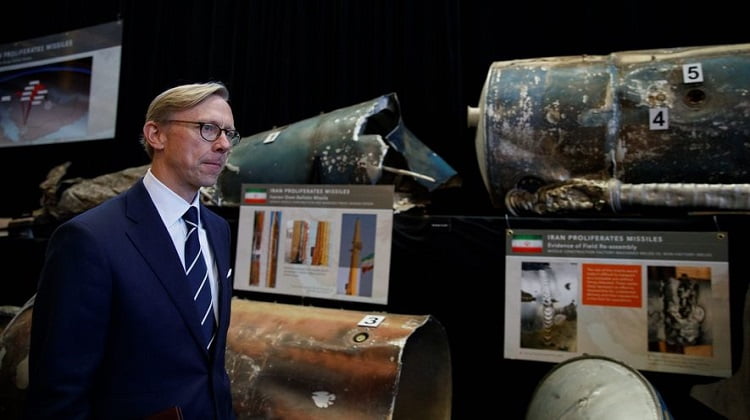 President Trump’s point man on curbing Iranian aggression offered fresh evidence Thursday that is violating a United Nations ban on weapons exports by sending rockets and other military equipment to proxies around the Middle East, and warned that the U.S. is prepared to use force to curtail such activity. 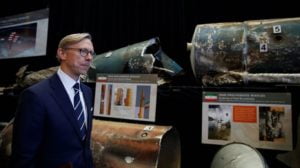 Standing before a dramatic backdrop of Iranian weaponry that the U.S. says was captured from -backed militants in , Bahrain and Afghanistan, , special representative for , said the Islamic republic has been shaping events across the region for nearly four decades through “illegal weapons transfers, proxies and terror — a deadly trifecta.”

Among the equipment on display were anti-tank weapons, unmanned aircraft, small arms and other advanced weaponry captured across the region. The U.S. accuses of arming proxies that include ’s Houthi rebels, militants in Bahrain and Afghanistan’s Taliban.

said the ’s policy remains open to negotiations with but stressed that the U.S. “will not hesitate to use military force when our interests are threatened.”

The weaponry was displayed at Bolling Air Force Base just a day after the , including more than a dozen Republicans, delivered a rebuke to the with a vote signaling growing opposition to U.S. support for the Saudi-led campaign against ’s Houthis. Secretary of State Mike Pompeo argued before Wednesday’s vote that ’s meddling in the war was a prime reason the U.S. had to remain engaged in the fight.

said the materiel on display solidifies the ’s case that is running an increasingly dangerous weapons proliferation program in the Middle East.

“The tools of ’s foreign policy are here before you today,” he told reporters in front of what he claimed was an Iranian Sayyad 2C surface-to-air missile captured by Saudi Arabian forces from Houthi forces in .

“This is not foreign policy; this is state-sponsored revolutionary terrorism,” said. “This missile was designed and manufactured in , and the writing in Farsi on its side translates as ‘the hunter missile.’ The conspicuous Farsi markings is ’s way of saying they don’t mind being caught violating U.N. resolutions.”