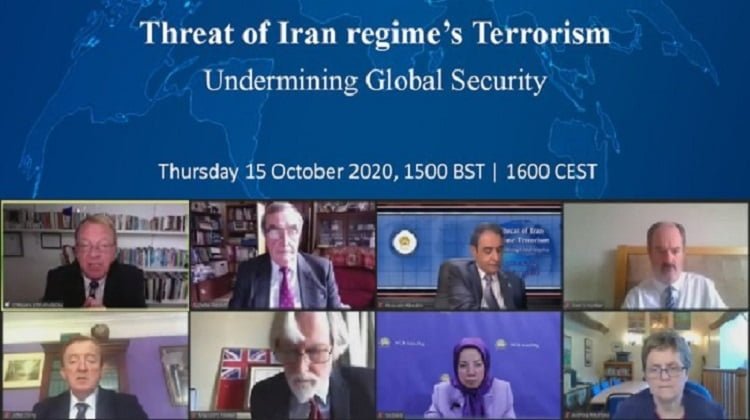 The National Council of Resistance of Iran (NCRI) holds an online event today on the Iranian regime’s terrorism and how it undermines global security. This event is being attended by several prominent lawmakers from the United Kingdom. Participants are highlighting the persistent threat of terrorism stemming from the Iranian regime.

The event comes in the wake of new threats by the regime’s incarcerated diplomat-terrorist Assadollah Assadi being revealed by the western media. Assadi who was arrested following the regime’s foiled bomb plot against the NCRI’s “Free Iran” gathering in 2018 in Paris, has threatened the Belgian authorities of attacks by the mullahs’ proxy groups if he is found guilty.

The foiled bomb plot in 2018 and Assadi’s threats once again underline the necessity of the European countries taking a firm action against the mullahs’ regime.

The following are the remarks by participants at today’s webinar:

In June 2018, Iranian regime foreign minister Mohammad Javad Zarif was responsible for a bombing attempt against the Free Iran rally of the NCRI. The conspirators, including Assadollah Assadi, a regime diplomat are now on trial in Belgium. It is the first time that a regime diplomat is directly involved in a terrorist attempt.

The senior diplomat Assadi replaced in the Vienna embassy, was redeployed to Tirana by Zarif. Zarif had clearly instructed his new team of diplomats in Tirana that their main task was to track down members of the Iranian opposition People’s Mojahedin Organization (PMOI/MEK) in the country. The regime tried to detonate a bomb at the Nowruz ceremony of the MEK.