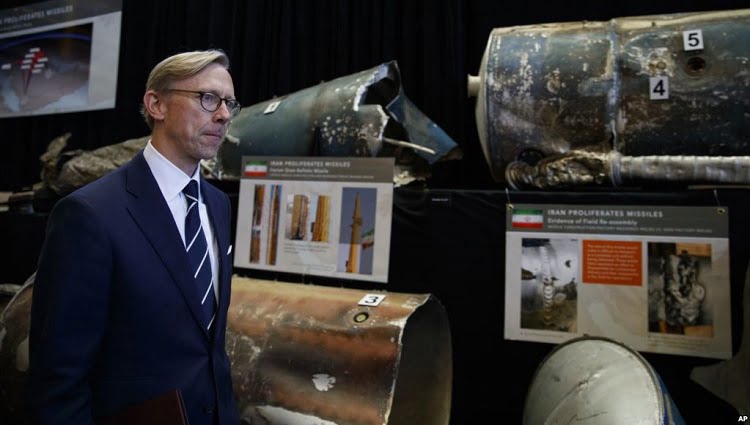 To back up its assertions, the U.S. on Thursday unveiled what it said was more evidence of Tehran’s meddling: pieces of missiles, rockets, drones and other Iranian weaponry, either recovered from Iranian proxies or interdicted on the high seas.

“The new weapons we are disclosing today illustrate the scale of Iran’s destructive role across the region,” U.S. Special Representative for Iran Brian Hook told reporters while standing in front of a section of a Sayyad-2C surface-to-air missile he said had been intercepted by Saudi forces earlier this year, before it could reach Houthi rebels in Yemen.

“Tehran is intent on increasing the lethality and reach of these weapons to deepen its presence throughout the region,” Hook said. “We are one missile attack away from a regional conflict.”

This is the second time in less than a year that the U.S. has publicly displayed weapons it claims Iran sent to proxies and terrorist groups. Last December, U.S. Ambassador to the United Nations Nikki Haley chastised Iran after showing off parts of missiles and drones recovered by Saudi Arabia and the United Arab Emirates, calling the evidence “undeniable.”

Since then, U.S. officials say the collection has grown to include the surface-to-air missile, long-range drones, anti-tank guided missiles, AK-47s, sniper rifles, grenades and even a second Qiam short-range ballistic missile, also known as a Burkan-2.