While tensions between the United States and Iran continue following the shooting down of a US drone, social media users have been responding with their own interpretations of the developments. 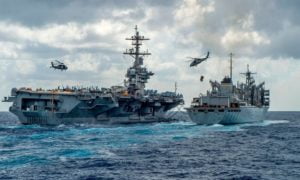 Earlier this week, Iranian broadcast media unsurprisingly gave heavy coverage to the downing of the drone by the Islamic Revolution Guards Corps (IRGC).

President Donald Trump said the US military was ready to retaliate against Iran, but in a tweet explained why he had changed his mind at the last minute.

While some Iranians expressed relief, and encouraged the two sides to talk, others taunted the US, claiming President Trump had backtracked on launching air strikes because he “feared the might of Iran”.

Iran’s Foreign Minister Mohammad Javad Zarif said on Twitter that Iran did not seek war but would “zealously defend our land, skies and waters”.

The shooting down of the drone followed accusations by the US that Iran had attacked two oil tankers with mines last Thursday just outside the Strait of Hormuz, in the Gulf of Oman.

Many social media users voiced concern about the prospect of conflict. “We as Iranian people are ready to defend our territory” read one tweet.

Some anti-establishment users took the opportunity to pour scorn on the current Iranian regime led by moderate President Hassan Rouhani.

“I am an Iranian and we will get rid of this [sic] stupid and ideological leaders. I promise you. It will be soon. God bless America,” commented one Twitter user.

Trump says military was ‘cocked and loaded’ to retaliate
What would a US-Iran conflict look like?
US-Iran: Airlines re-route flights after drone incident
Another post from an Iranian social media user supporting the US president read: “We do not want this satanic regime ok? There is not any way but war to destroy them.”