Nov 26, 2019 editorghazal IRGC, Politic, Quds Force, Slider Comments Off on U.S. and Israel Seek Assurances on Iran From Each Other, but for Very Different Reasons 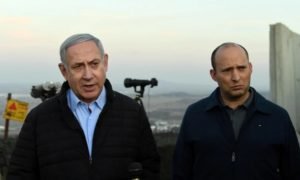 Israel has hosted a series of senior defense officials in recent weeks, climaxing in Sunday’s visit by the chairman of the Joint Chiefs of Staff, Gen. Mark Milley, who was hosted by Israel Defense Forces Chief of Staff Aviv Kochavi.

Both countries took care to stress that ties between their respective defense establishments are particularly close. But two other considerations that aren’t talked about publicly are also apparently motivating this aerial convoy of senior American officials. Both have to do with calming fears – Israel’s fear of American abandonment and America’s fear of unilateral Israeli action.

The Israeli fear stems from the Trump administration’s recent moves: It has refrained from responding to Iranian attacks in the Gulf, including one that did serious damage to Saudi oil facilities, another that downed an expensive American drone, and has withdrawn American soldiers from the Kurdish regions of northeast Syria, opening the way for a Turkish ground invasion. Israel is scared by America’s apparent desire to quit the region, which leaves Iran with more room to maneuver.

The Americans, in contrast, are apparently worried about decisions Israel might make in the future. Senior Israeli officials speak ceaselessly about the dangers posed by Iran’s efforts to entrench itself militarily in southern Syria, smuggle advanced weaponry to Hezbollah and bolster its presence in Iraq and Yemen. Increased military friction between Israel and Iran plus its satellites could drag the Americans into a regional war, which, judging by his public statements, U.S. President Donald Trump doesn’t want.

This is somewhat reminiscent of the series of senior Pentagon officials who visited Israel in the summer of 2011 and again the following summer. At both junctures, as we later discovered, Israel was considering attacking Iran’s nuclear facilities on its own. Prime Minister Benjamin Netanyahu and then-Defense Minister Ehud Barak favored such an attack; the American generals were sent to take the pulse of their Israeli counterparts who opposed it.

As far as we know, no such attack is currently on the agenda, since Iran is still committed in principle to its nuclear deal with five major powers (the sixth, America, quit the deal in May 2018), and its recent violations of the deal haven’t yet crossed the line that Israel deems intolerable.

On Sunday, Netanyahu and Defense Minister Naftali Bennett toured the Syrian and Lebanese borders. Netanyahu announced that Israel would work to thwart arms smuggling from Iran to Syria and block its efforts “to turn Iraq and Yemen into bases for launching missiles.” Bennett added that Iranian forces in Syria “have nothing to look for here.”

Monday, at the official memorial ceremony for soldiers who died in the 1956 Sinai war, Bennett said, “it’s clear to our enemies that we’ll respond to any attempt to prevent us from living. Our response will be very precise and very painful. I’m aiming these remarks not only at those who threaten our lives on the southern front, but also at those in the north.”

On 3rd of January a news spread in social media regarding Qasem Soleimani and AbuMahdi Mohandes who has died by a US drone strike near Baghdad Airport and this was the end of their lives. In social media, especially Iranian users, there was a chaotic situation, some called of “the general of... END_OF_DOCUMENT_TOKEN_TO_BE_REPLACED