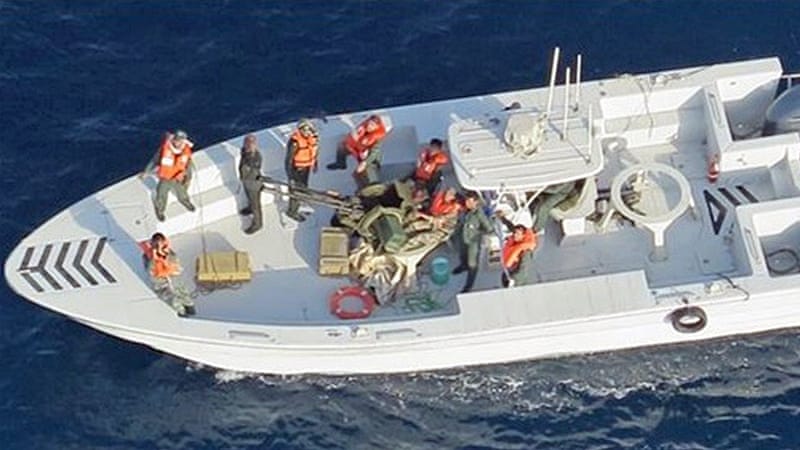 The US military has released new images it said showed Iran’s Islamic Revolutionary Guard Corps (IRGC) removing an unexploded mine from a Japanese-owned tanker following suspected attacks on two vessels in the Gulf of Oman on June 13.

The images, released on Monday, also showed a hole on the side of the Japanese-owned Kokuka Courageous that officials say appeared to have been caused by another mine.

The new photos follow the earlier release last Thursday of a grainy video, which the US said showed the IRGC removing a suspected limpet mine from the Kokuka Courageous.

Washington blames Tehran for the reported attacks in which two vessels near the strategically important Strait of Hormuz were damaged, leaving one ablaze and both adrift, forcing scores of crew to abandon their ships

“Iran is responsible for the attack based on video evidence and the resources and proficiency needed to quickly remove the unexploded limpet mine,” the US military’s Central Command said in a statement accompanying the still images.

Washington has blamed Iran for a similar attack on May 12 off the coast of the United Arab Emirates.

Iran has vehemently denied any involvement, hinting that the US may have carried out the latest suspected attack in order to apply extra pressure on Tehran on top of the crippling sanctions it re-imposed over the past year.

Washington has tightened sanctions on Tehran and moved to cut its oil production to zero in the year since it exited a landmark multi-lateral accord between Iran and world powers. The deal offered Iran relief from global sanctions in exchange for curbs on its nuclear programme.

It is still not clear what caused the damage last Thursday, with the Japanese owner of the Kokuka Courageous saying crew members saw “flying objects” before a second blast on the ship.

Speaking to Al Jazeera a day after the incident, Justin Bronk, a combat technology specialist at the Royal United Services Institute, said the patrol boat shown in the US military’s video was known to be the kind used by the IRGC.

However, Bronk added that if Iran had been responsible for the attack, removing the mine would “be a very, very brazen thing to do,” while under high scrutiny from the US.

“On the other hand, you could argue that they [the Iranians] were keen to pick up an exploded mine to avoid it linking back to them. Although, realistically, if this was the Iranians, there will be enough evidence to link back to them even without the unexploded mine,” he said.

Regardless of the cause, the incident has added to sky-high tensions between the US and Iran, and in the Gulf region.

Shortly after the new images were released, the US also announced it was sending 1,000 additional troops to the Middle East for “defensive purposes”.

Also on Monday, Iran said it was on track to breach the internationally agreed limit of its stockpile of low-enriched uranium within 10 days.

The move “will be reversed” once the remaining signatories to the pact fulfilled promises to deliver on the deal’s economic benefits, an Iranian official said.

The United Nations, European Union and several allies of the US and Iran have urged both sides to show restraint, with the UN warning that the world cannot afford a “major confrontation in the Gulf”.

Both US and Iran have said they do not seek war with each other.

A U.S. military image released by the Pentagon in Washington on June 17, which is says was taken from a U.S. Navy MH-60R helicopter in the Gulf of Oman in waters between Gulf Arab states and Iran on June 13, shows personnel that the Pentagon says are members of the Islamic Revolutionary Guard Corps Navy removing an unexploded limpet mine from the M/T Kokuka Courageous, a Japanese owned commercial motor tanker. Picture taken June 13, 2019. U.S. Navy/Handout via REUTERS ATTENTION EDITORS-THIS IMAGE HAS BEEN SUPPLIED BY A THIRD PARTY. – RC1678DE4040