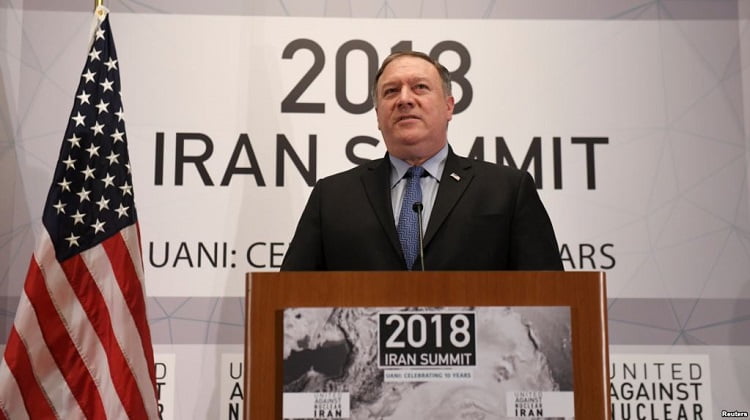 U.S. Secretary of State Mike Pompeo speaks during the United Against Nuclear Iran Summit on the sidelines of the U.N. General Assembly in New York, Sept. 25, 2018.

U.S. Secretary of State Mike Pompeo said Friday the United States has ordered a temporary relocation of diplomatic personnel in Iraq because of growing threats to U.S. diplomatic facilities by Iran’s Islamic Revolutionary Guard Corps Quds Force and its allied militias in Iraq.

In a written statement Pompeo said, “Given the increasing and specific threats and incitement to attack our personnel and facilities in Iraq, I have directed that an appropriate temporary relocation of diplomatic personnel in Iraq take place.”

Pompeo warned Iran against any attacks on U.S. diplomatic facilities in the region.

“I have advised the government of Iran that the United States will hold Iran directly responsible for any harm to Americans or to our diplomatic facilities in Iraq or elsewhere and whether perpetrated by Iranian forces directly or by associated proxy militias,” Pompeo said.

The secretary’s warning follows a hearing this week in the U.S. Congress on Iran’s growing influence inside Iraq.

Some experts and U.S. lawmakers voiced concerns that as Iraq is trying to put together a cabinet to form the new government following its general elections in May, Iran and its loyal Shiite militias in Iraq will not only have influence in the new government, but also have access to U.S.-provided military equipment.

“The Iranian-supported terrorists-turned-politicians regularly threaten Americans and our allies while their militias have committed countless atrocities across Iraq and Syria,” Republican Congressman Ted Poe, chairman of the House Foreign Affairs Committee’s Subcommittee on Terrorism, Nonproliferation, and Trade, said during Wednesday’s hearing.

“While we do nothing, Iran is doing everything. They are expending all their efforts to consolidate their power in Baghdad and it is paying off. Decisive action must be taken now,” Poe added.