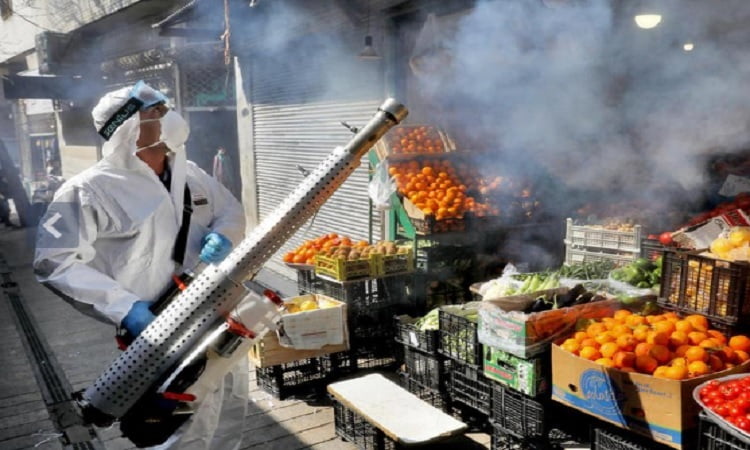 Crossing more borders, the new corona virus hit a milestone Friday, infecting more than 100,000 people worldwide as it wove itself deeper into the daily lives of millions, infecting the powerful, the unprotected poor and vast masses in between.

The virus, which has killed more than 3,400 people, edged into more U.S. states, emerged in at least four new countries and even breached the halls of the Vatican. It forced mosques in Iran and beyond to halt weekly Muslim prayers, blocked pilgrims from Jesus’ birthplace in Bethlehem and upended Japan’s plans for the Olympic torch parade.

As financial markets dived again, repercussions from the virus also rattled livelihoods in the real economy. “Who is going to feed their families?” asked Elias al-Arja, head of a hotel owners’ union in Bethlehem in the Israeli-occupied West Bank, where tourists have been banned and the storied Church of the Nativity was shuttered.

At the White House, President Donald Trump signed a $8.3 billion bill to fight the coronavirus a day after Italy said it would double its virus fight spending to 7.5 billion euros ($8.5 billion). In Geneva, the U.N. health agency said it had received applications for 40 possible virus tests, had 20 vaccine candidates in development and reported that numerous clinical trials of experimental drugs for the new coronavirus were under way.

“We’re all in this together. We all have a role to play,” said Tedros Adhanom Ghebreyesus, chief of the World Health Organization, urging more global cooperation from the business world and solidarity with the poorest.

Yet even as COVID-19, the disease caused by the virus, reached 90 countries, more than half of those who contracted the virus have now recovered. It’s retreating in China, where it first emerged, and in nearby South Korea.

Questions swirled around whether Iran could control its outbreak, as the number of reported infections jumped beyond 4,700 on Friday, with 124 deaths. Iran set up checkpoints to limit travel and had firefighters spray disinfectant on an 18-kilometer (11-mile) stretch of Tehran’s most famous avenue.

US turned to Iran for help in Afghanistan

The IRGC’s Propaganda Machine in Europe

American father and son sentenced to 10 years in Iranian prison

U.S. Treasury to brief UAE and Israel on Iran pressure

Mehdi Tahaghoghi Arrested to Serve One Year in Prison in Exile