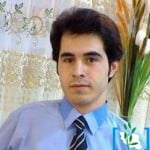 The family of Hossein Ronaghi-Maleki has been under constant pressure during the 16 month period since his arrest. According to the Human Rights House of Iran, a warrant has been issued for Hossein’s mother Zoleikha Mousavi. Last week, Zoleikha Mousavi and her husband were summoned to the Intelligence Ministry.

In the past several months, Hossein Ronaghi’s parents were summoned to the Intelligence Ministry and interrogated several times. They have even been interrogated about the reporters who had contacted them in order to get an update on the condition of their son.

They were not allowed to visit Hossein this week. Ronaghi is in critical condition due to his kidney problems and is in urgent need of surgery.

Hossein Ronaghi Maleki who has been imprisoned since December 13, 2008 has been sentenced to 15 years in prison.