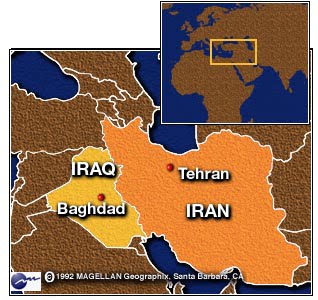 The Washington Post – Iranian-backed militias in Iraq are using more sophisticated weapons than in the past to target U.S. troops and military installations in Iraq, according to senior U.S. officials

James F. Jeffrey, the U.S. ambassador to Iraq, said Tuesday that fresh forensic testing on weapons used in the latest deadly attacks in the country bolsters assertions by U.S. officials that Iran is supporting Iraqi insurgents with new weapons and training. “We’re not talking about a smoking pistol. There is no doubt this is Iranian,” Jeffrey said in an interview.

In recent weeks, Jeffrey and U.S. military officials have blamed three Shiite militia groups — the Promised Day Brigade, Ahl al-Haq and Kataib Hezbollah — for a wave of violence that resulted in the bloodiest month for U.S. forces here in two years. The groups have been trained and supplied by Iranian Revolutionary Guard special forces, and Iranian special agents have crossed into Iraq to provide some of the training and materials, officials said.

Jeffrey provided details of the forensic testing after Gen. Lloyd Austin, commanding general of U.S. forces in Iraq, declined to do so earlier in the day.

In a brief exchange, Austin said only that the weapons “are coming in from Iran, we’re certain of that.”

Jeffrey and Austin traveled Tuesday to the southern port city of Basra for the opening of a new U.S. consulate intended to serve Iraq’s nine southern provinces. The consulate, housed in dozens of trailers behind thick blast walls, is scheduled to relocate to a more permanent structure in September, officials said.

U.S. officials have previously accused Iran of supplying weapons and training to Iraqi insurgents, although details have been scant. In a 2009 report on global terrorism, the State Department accused Iran of providing Iraqi militant groups with “advanced rockets, sniper rifles, automatic weapons and mortars” for use against coalition forces. The report also accused Iran of increasingly the lethality of the roadside bombs, or IEDs, that militants were using to blow up U.S. military vehicles.

Iranian groups “provided training both inside and outside of Iran for Iraqi militants in the construction and use of IED technology and other advance weaponry,” the document said. Separately, the Justice Department in 2008 indicted a group of Iranian businessmen in the purchase of sophisticated electric circuits and other hardware that were later used to make roadside bombs in Iraq.

Perhaps the most specific evidence until now of direct Iranian support for attacks on U.S. troops came in May 2009 after the discovery of a cache of weapons in a riverbank in Iraq’s eastern Maysan province, a majority-Shiite enclave that borders Iran. The cache included 150 copper plates that had been professionally milled for use in a particularly deadly type of device known as “explosively formed projectile” bombs. The cache also included sophisticated launching rails for rockets that are designed to increase range and accuracy. It was later linked to an Iraqi militia that U.S. officials say is trained and equipped by Iran.

Michael Eisenstadt, the director of military studies at the Washington Institute for Near East Policy, said Iran has little reason to hide its support for groups attacking Americans in Iraq.

“They’re feeling a lot more confident now, as the supreme leader is not worried about an American attack” on Iran, Eisenstadt said. If anything, he added, Iran is happy to claim sponsorship of anti-U.S. proxy groups that will vie for power in Iraq after U.S. forces leave the country. “As we draw down, they will ramp up to give the impression that they pushed us out,” he said.

Elsewhere in Iraq, at least 35 people were killed and at least 28 injured Tuesday when a booby-trapped car and explosive charge detonated simultaneously near the city council building in Taji, 12 miles north of Baghdad, officials said. No group immediately asserted responsibility, but Iraqi political officials said the attacks were part of a feud between Sunnis and Shiites in the Sunni-dominated area.

On Monday night, attackers launched rockets at a hotel in Baghdad’s Green Zone, killing at least five people, including two women and three children, police officials said. The attack came as Americans were wrapping up Fourth of July celebrations in U.S. buildings nearby.

Under an agreement brokered during the George W. Bush administration, all U.S. forces are scheduled to leave Iraq at the end of the year unless the Iraqi government requests that some remain to bolster security and help train the Iraqi army.

Administration officials have said the military would be willing to leave some U.S. troops if the Iraqi leadership asks, which it has yet to do, given the political outcry that would probably ensue. Fewer than 50,000 U.S. troops are deployed in Iraq.

National Security Council spokesman Tommy Vietor said Tuesday that the withdrawal remains on schedule for Dec. 31 and that “right now there are no plans to keep troops in Iraq beyond that point.” He said any Iraqi request to do so “would be given serious consideration by this administration.”