BREAKING NEWS
GMT+2 11:41
Home Economy What the IRGC is Looking for in Iran’s Pharmaceutical Drug Market?

What the IRGC is Looking for in Iran’s Pharmaceutical Drug Market?

Dr. Akbar Karami is an Iranian physician, author, and researcher in the field of religion and social issues. In the aftermath of the fraudulent Iranian election in 2009, he was arrested from his clinic by the IRGC intelligence members and jailed for 8 months. Later he was convicted in closed door court for 11 years in prison and exile, as well as 80 lashes.  He was accused of insulting Iranian Leader Khamenei and President Ahmadinejad and destabilizing the Iranian regime.  His other accusations were publishing articles and holding interviews related to gender equality and sexual freedom.  مقاله به فارسی

Iran Briefing: The fact that the Iranian Revolutionary Guard Corps (IRGC) is heavily involved in the black market and smuggling is neither a new phenomenon nor a matter of surprise for Iranian readers. Contrary to what is being stipulated in the Iranian constitution, the IRGC has long been interfering in all affairs of the state. This disturbing and illegal interference dates back to the period of Ali Khamenei’s leadership (second absolute Ruler of the Jurisprudence or Vali Faqih) and was due to his heavy dependence on the military and security forces, and in particular to the IRGC, for marginalizing his traditional foes and clamping down on his new rivals. This interference is so far-reaching and obvious that even President Ahmadinejad – whose presidency tenure is a product of the leader and IRGC – calls the revolutionary guards “our smuggling brothers.”

After the 8-year-long Iran-Iraq war, and during the so-called “Construction Era” of Hashemi Rafsanjani’s presidency, the IRGC, with the president’s extensive support, entered into economic activities. The ground was paved for the IRGC to capture major national financial resources as the leader of the Islamic Republic was and still is, more than ever, in dire need of the IRGC to clamp down, quell and silence the masses with a view to advance the notorious coup d’etat of 2009 (bringing Ahmadinejad to power with the rigged presidential election). Therefore, today the IRGC has transformed into an institution that not only is economically independent but also tries to take control of state economy and the government as a whole.

Despite Ahmadinejad’s occasional scuffles with the IRGC, one shouldn’t forget that the Ministry of Petroleum (Iran’s economic engine) and giant Telecommunication Company of Iran are only small gifts offered by the president to the IRGC and his coup committers.

One shouldn’t be confused and fooled by Iran’s political and economic elite who wear suits and are present at the top decision making centers. These white collars are mostly, or used to be, from security and IRGC backgrounds. The supreme leader has lost his legitimacy, if any, and without the military and intelligence forces, he cannot run the country anymore. Thus, it is no surprise that only those who were involved in the mass killing of the dissidents and who played a role in consolidation of the leader’s autocratic power can pass the different checks-and-balances layers of the system. It is not surprising if the parliament, the cabinet of ministers, and many low and high profile officials in the Islamic Republic are coming from IRGC or intelligence agents, since the Islamic Republic has transformed and been reduced to an entity with different layers of IRGC and intelligence agents (who are mostly members of IRGC too). Even many cleric statesmen have experienced working for IRGC and security institutions, or at least they have a history of flirting with Imam Sadiq Brigade. 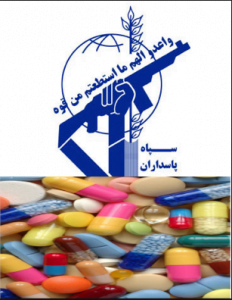 Enjoying such a status and setting, and as chief tycoons of Iran’s economy, politics and security, the IRGC members are involved in a vast amount of financial and ethical corruption as well as illegal transactions. This interference emanates from two sources:

First, according to Transparency International, Iran is among the most corrupt nations of the world, and, as a result, it is not surprising that out of all petrodollars and other revenues that are poured into IRGC’s pockets, only a small part of it goes to the low-ranking guards. But this doesn’t mean that they (the low ranking revolutionary guards) lag behind their commanders and won’t exploit security and intelligence rents by interfering in the wider, lucrative black market and smuggling. A lot of low-level IRGC members who have no considerable share of economic and political interests of IRGC are, like those in other strata, involved in major illicit activities such as embezzlement, land confiscation, bribery, money laundry, drug trafficking, underground sex industry, selling university admission exams and even smuggling pharmaceutical drugs.

Second, the pervasive meddling of IRGC in all state affairs has basically paralyzed the legal control and counter-control systems of the society. Consequently, involvement in corruption and illicit activities is easy and cheap, at least for the IRGC members. Dossiers such as 300-Billion-Tuman Embezzlement are just the tip of an iceberg that rarely comes to light.

We shouldn’t forget to add illicit activities to the exhaustive list of official functions of IRGC. Also, in case the IRGC is a clear accomplice to international mafias all over the world and involved in new cases of transgression and wrongdoing, this should come as no surprise.

These days there are speculations about the role played by the IRGC in Iran’s pharmaceutical drug market, as there are reports indicating IRGC’s intervention for increasing pressure on the general public. To my understanding, however, there are other factors involved in this issue. There are news stories showing that the IRGC plays essential role in controlling and confining Iran’s pharmaceutical drug market. Hence, contrary to what IRGC and its parallel forces try to prove, importing foodstuff and medicinal and medical products are not subject to sanctions imposed on Iran, and the countries implementing embargos have repeatedly stipulated that food and pharmaceutical drug related items are not among sanctions, and that the Islamic Republic can easily provide them.

It seems that a faction within the IRGC, by controlling and managing the pharmaceutical drug market, tries to attribute the popular and public resentment over economic crisis to the sanctions and its perpetrators, intentionally fueling the medicinal and medical bottlenecks to discredit the sanction-imposing countries in the public opinion of Iran.

The IRGC, which is omnipresent at every corner of Iran’s politics and economy after the 2009 presidential coup (sham election), tries to scapegoat and play a blame game by blaming sanctioning countries and, if failed, blaming Ahmadinejad for all problems. The IRGC tries to distance itself and the Supreme Leader from the decay and degeneration which is an outcome of tyranny and illegal intervention of the IRGC in all affairs. The IRGC strives to prove, at least to the advocates of Khamenei, that he is still an able leader and the problems of the country, as Khamenei repeatedly says, has to do with the US hostilities against Iran.