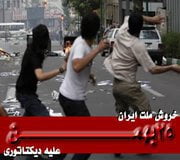 According to eyewitness reports, demonstrators have gathered in Namazi Square in Shiraz chanting “ Honorable Iranians.  Support, Support”. Clashes between security forces and demonstrators has erupted.

A large crowd has also gathered in Isfahan’s Enghelab Square. There have been reports of clashes between the security forces and demonstrators. More news to come.

Protesters beaten, but continue to move

The people’s protest gatherings have formed in various parts of Azadi and Enqelab avenues and the nearby streets. People have been beaten on Enqelab Avenue in Tehran but the people still continue to move toward Azadi Square. Mobile phones are cut in the central part of the city. Tear gas has also been used at the Vali-Asr and Azadi Square intersections. There are a lot of security and police forces present. In the southern part of the city, next to Al-Mahdi park, there are plainclothes forces stationed on 16 Azar Street. There have been clashes and people have been beaten by plainclothes forced stationed under College bridge.

A number of students from the Technical faculty of the University of Tehran have gathered in front of the gates of the university. The campus is filled with police and security forces. A large group is moving from Ferdowsi Square to Enqelab Square and their numbers are increasing by the minute.

Iran Attacks ISIS in Iraq to Protect its Regional Influence

Habibollah Latifi will not be executed

“Because I Complained I Was Arrested Again,” Says Payman Aref