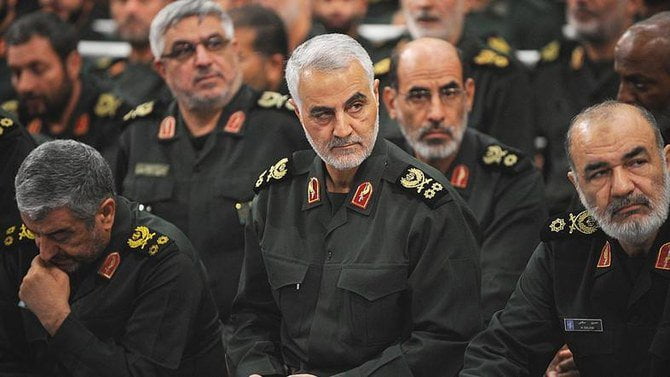 LONDON: The wives of two high-ranking Iranian Revolutionary Guard Corps members are allegedly involved in 12 cases of financial corruption, several media outlets reported on Saturdayciting a member of Tehran City Council.
Council member Morteza Alviri made the allegations when asked during an interview about the role the wives of General Qasem Soleimani and General Ali Jafari played in transferring the ownership of a number of companies.
Alviri said: “Twelve complete and clear cases of serious violations were delivered to the judiciary to act. This is one of our complaints, that I recently talked about.
“That is why when a few eight-year-old girls perform at a women-only event in Milad Tower, they woke up Mr. Najafi (former Tehran mayor) at midnight to take action against it, but for twelve obvious financial violations the prosecutor’s office does not even ask for an explanation. We do have this complaint,” he added.
Mohammad Ali Najafi — a reformist mayor of the capital and a confidant of Hassan Rouahni — was handed over to Iran’s criminal court last month after confessing to killing his wife in a case that shocked the country.