BREAKING NEWS
GMT+2 12:35
Home Basij The defendants, accused of attacking the Saudi Embassy in Tehran are acquitted of charges of property damage 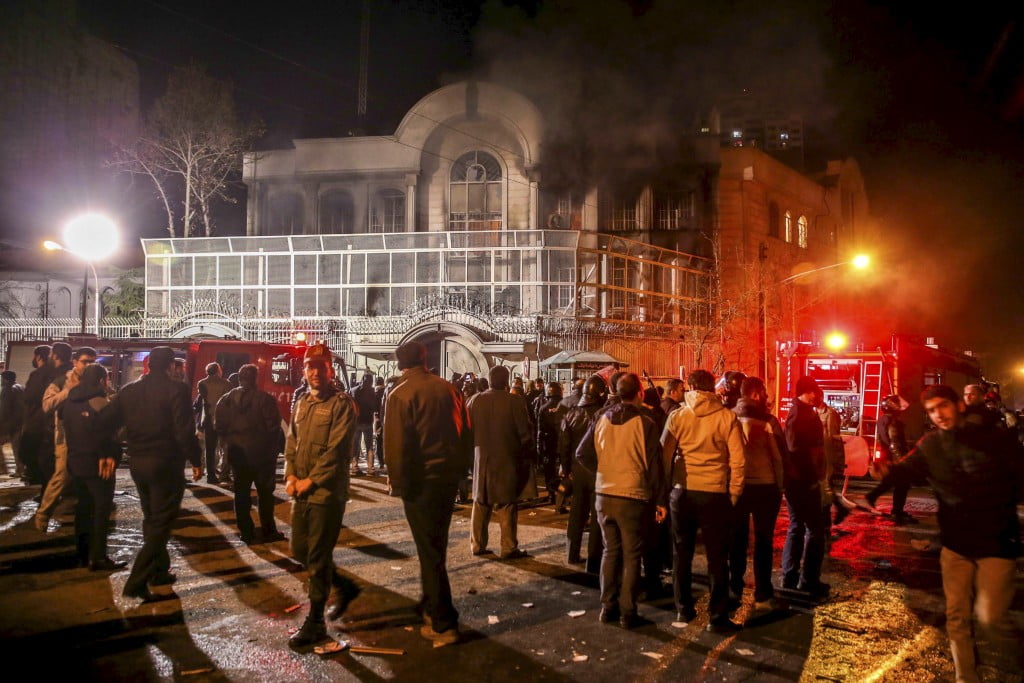 Iran Briefing     “There were about 45 defendants in the case, 25 of whose cases are being investigated in the Special Clerical Court while the other 20 were investigated in the Special Court for Civil Servants.” the lawyer of a number of the defendants said. Attacking the Saudi Embassy under the excuse of Sheikh Nimr’s death last year, by the Basij members was the country’s third time of attacking on embassies in the Islamic Republic’s 38-year history. Presenting a private prosecution in the court was impossible due to the lack of diplomatic relations with Saudi Arabia, however in the second attack on the embassies by the Basij members under the command of the Supreme leader during the tenth government, Iran was forced to apologize and pay for all damages to buildings, objects and installations in order to resume their diplomatic relations.

For further information, Iran Briefing has previously represented several articles about the attacks on Britain and Saudi Arabia embassy presented at the end of the present article. Following is Shargh’s full article reporting the attack and the court proceedings:

Shargh newspaper: Accusation: “Deliberate damaging the Saudi Embassy in Tehran”, sentence: “acquitted”, reason:” Saudi Arabia’s not pleading”. This is a part of the court order about the defendants of attacking the Saudi embassy releasing on last Sunday, after more than three months.

The lawyer of a number of defendants accused of attacking the Saudi Embassy in Tehran, has revealed some of the details regarding the issued sentences in the case, stating that “the defendants are acquitted of the charges of criminal property damage. Earlier on July, the president at a conference commemorating the judiciary had appointed: “People want to know how the judiciary deal with those who violated the law and national security and attacked the embassy.”

He said:” Unfortunately, my client (M.A) is referred as one of the leaders of the attack on the Saudi Embassy while he didn’t even approach the embassy, therefore he is one of those who are sentenced to 6 months in prison.”

The lawyer of a number of defendants accused of attacking the Saudi Embassy in Tehran acknowledged that the attackers were members of Basij and said: “all the 20 defendants are members of Basij who have a history of attending the battle fronts during Iran-Iraq war and even fighting in Syria. On the other hand, they were not prevented by the law enforcement forces, either.” He added:” We’ll definitely appeal the issued sentences. We have 20 days to object the sentences after being officially notified.”

Attacking on the Saudi Arabia Embassy

”Sheikh Nimr”, the Shiite cleric and Saudi Arabia’s critic was executed on last January 2nd. Hours later, some of protesters of Nimr execution gathered together in front of the Saudi Embassy in Tehran and the Consulate in Mashhad. Later that night, the Saudi Embassy building in Tehran was set on fire and seized by the protestors. At last, Police dispersed the demonstrators and took the control of the situation.

Following the attack, Saudi Arabia cut all its diplomatic ties with Iran and called out all his diplomats from Tehran. Iranian diplomats also had to leave Saudi Arabia; the same reaction which occurred after the attack on the British embassy in November 2011.The attack also caused a number of other Arab countries to reduce their diplomatic relations with Iran. Since then many Iranian authorities criticized the attackers of the Saudi embassy; the officials believed it rescued the Saudi Arabia “Sheikh Nimr” and “disaster MENA”. Iranian President Hassan Rouhani said: “it should be investigated whether the attackers to the embassy are extremists or ignorant individuals?”

He condemned the attacks asking the Iranian judiciary to immediately prosecute the attackers invoked. He said by punishing the attackers and those who orchestrated this obvious offense, his government should put an end once and forever to such damage and insults to Iran’s dignity and national security.”

Detention of external agents
since then, the judicial authorities announced the arrest of agents. Finally 20 days later Deputy Interior Minister of Security, Hossein Zolfaghari said: “the exterior agents of attacking the Saudi embassy has been arrested in abroad and is currently under investigation.” According to him, these people have been working over 10 years in Karaj and Tehran, centered their activities on charities and religious activities.” He added: “Intentionally or unwittingly, they have been supported by authorities as religious matters.” Security vice Governor of Tehran, “Safar Ali Baratloo” was dismissed less than a week after. During the presidential elections of 2009 and 2013 Baratloo was the head of election headquarters in Tehran. Later, “Mohammad Reza Mohseni Sani” said to ILNA news agency: “Hasan Kord Mihan who was living in Syria for a while, has been arrested in the airport.” According to him, Kord Mihan was involved in attack on Saudi Arabia Embassy.

Meantime, the Cultural adviser of the president, Hesam al-Din Ashena, in an interview with Andishe Pouya news agency mentioned worthy codes about those responsible for the attack on the embassy. He said: “Clearly, these people (those who had neglected) will be dismissed on their due date, however a day after, they would say to the religious people that we were dismissed because we were going to confront with improper hijab. These are the realities of our country and will go on.” Finally on July, 18 and 19, two court sessions were held for defendants; in these sessions one of the defendants said: “It is not fair to annoy the Hezbollah members.” Another defendant said: “I regret my performance, I broke Sir’s hearth.” Another said:” I was going to the pharmacy that I saw the crowd. I asked people what’s going on. They said the Saudi Arabia embassy has been set in fire. Then I got off the car and the police took me to Evin I was innocent but they kept me there for 20 days.”

Referring to the trials of the perpetrators of the attack on the Saudi Arabai embassy, Hojjat al-Islam Mohseni Eje’i in his 99th news conference reported a reduction on the sentences. He said: “some were angry with the Saudi Arabia and Mena accident. Those who attacked the Saudi embassy because of their anger will get a commutation. There are Cases of sentence commutation stipulated in the Islamic penal code and the judge can determine and consider it. Article 37 and 38 of the IPC are in this regard.” After some time that the sentences were not issued, Mohammad Narimani, the lawyer of one of the defendants said in an interview with Bashgah Khabarnegaran: “this is a political case; it is not an ordinary situation and that’s why the judge needs some times to issue the sentences. Judge needs to consult with the Head of the Judiciary and the General Prosecutor.”

9- Ramazan Sharif condemned the attack on the British Embassy!
10- Attacks on the Saudi Embassy, a planned action