BREAKING NEWS
GMT+2 09:36
Home Economy Ali Saeedi on the media attacks on Rouhani and IRGC’s role in the economy

In recent comments Ali Saeedi, representative of the supreme leader to the Islamic Revolutionary Guard Corps (IRGC), appeared to acknowledge Islamic Republic of Iran Armed Forces Chief of Staff Majour-General Hassan Firouzabadi’s statements admonishing IRGC-linked media for their attacks on President Hassan Rouhani. However, this should not necessarily be seen as reflecting warming ties between Rouhani and the IRGC.

According to iranpolitik At a press conference at the Islamic Revolutionary Guard Corps (IRGC) public relations center, Ali Saeedi, representative of the supreme leader to the IRGC, acknowledged comments by Islamic Republic of Iran Armed Forces Chief of Staff Majour-General Hassan Firouzabad, who recently admonished IRGC-linked media for their attacks on President Hassan Rouhani on his conduct of nuclear negotiations. Prompted by a journalist, Saeedi said that this issue had two aspects. The first, according to him, was “logical, fair, and well thought out criticism and no one is against criticism, even the president has said that we are seeking criticism. Criticism creates the ground for growth.” 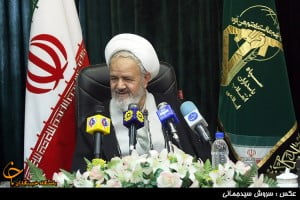 “The other perspective is that we come and take information, without accuracy about different aspects of the issue, put it on a website, and General Firouzabadi said why do some media outlets, which can be in a way associated with the armed forces, publish news without the necessary accuracy.”

He went on to say that “Whether we want it or not, some news agencies and media that are perceived to be associated with the IRGC; and it is expected from media like Fars News Agency that they respect the necessary thoroughness. Of course, they are completely accurate and trustworthy, but sometimes it is possible that a news report is distributed that has consequences.”

“General Firouzabadi had also said that in distributing news and criticism, and spreading information, there should be necessary accuracy, lest we pay an unnecessary price. Paying an unnecessary price is illogical. Let us say realities which create the ground for the growth and blooming of society, and come from compassion rather than sadness.”

Responding to another journalist question, this time on the recently leaked video showing IRGC commander Majour-General Mohammad-Ali Jafari speaking about the controversial 2009 Iranian presidential election, Saeedi appeared to evade the question by saying that:

“Anyone can have any interpretation from any speech that is different from the mind of the speaker and I do not think that for the present discussing this issue is necessary. Although I have not seen the video, cutting in before and after the speech cannot convey the intended meaning of the speaker.”

During the same press conference however, Saeedi was sure to emphasize the IRGC’s differences with the Rouhani administration in the economic arena where the president has tacitly criticized the IRGC and accused it of seeking a share of the country’s economic pie:

“In the economic sector the IRGC has announced its readiness to the administration and we know that it has high capacities for help. However, unfortunately there has not been and will not be a good welcome of this capacity…If the IRGC declares readiness this does not mean asking for a share, however we saw that it was interpreted like this.”

Emphasising the importance of the IRGC in meeting the economic challenges brought forth by Western sanctions, he asserted that: “The only solution for confronting the sanctions and pressures of the enemy is relying on internal strength and domestic capacity and the IRGC places whatever it has at its disposal in the service of the administration and people.”

Saeedi’s acknowledgement of Firouzabadi’s comments may point to the delicate nuclear consensus we have in the past argued exists between all political currents in Iran. The regime is seeking to show a united front on nuclear negotiations, and does not want any media outlets to create the impression that majour differences exist within the regime elite. Simultaneously, they may be seeking to prepare the small but vocal constituency which is deeply antagonistic to nuclear negotiations for any deal which may be signed in the coming months. And, underneath it all, tensions between Rouhani and the IRGC appear to persist, especially in the economic realm, where the president has tried to weaken the organization’s influence.

Who Are Iran’s Political Prisoners?