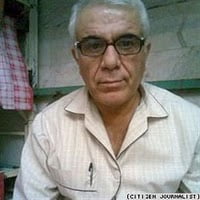 Insideofiran: In a letter delivered to the Human Rights and Democracy Activists in Iran group, political prisoner Arzhang Davoudi described the nature of the Velayat-e Faqih regime. He also revealed the organized crimes committed against defenseless prisoners in the ward 1 solitary confinement cells at Rajai Shahr ‘Gohardasht’ prison (Karaj, Iran).

After 33 years, the *Velayat-e Faqih brutes have not yet been civilized

*Guardianship of the Islamic Jurist (ruled by Ali Khamenei)

In the name of God,

Liberals of the world,

I remember in 1980 in Ahvaz a controversy was raised [regarding] Mohammad Gharvi, the governor of Khuzestan then, whose obscenity exceeded the Velayat-e Faqih agents. He had boldly stated to the people in Ahvaz, “Don’t worry, we will turn Koroush, the wealthy neighborhood of Ahvaz, into a skid-row like Asiababad.”

The “mostazafin”, [the name used in Iran to refer to the oppressed], who were listening to him, wondered disappointingly whether he had come to construct or destruct the city. If he is incapable of turning Asiababad into a better neighborhood than Kourosh when he has access to money from the export of oil, then why did he also want to destroy the Koroush neighbourhood and turn the entire city into ruins?

On May 19th, in cell 22 of ward 1, I reminded Hassan, one of the guards who had come to take one of the unfortunate prisoners to the Intelligence department of the prison that it had been a while since [we had used the rest room]. [Hassan] replied with a peculiar coolness, “Farajinejad, the head of the information security department, has ordered, that since solitary confinement cells in wards 1 and 2 are intended for tormenting stubborn and unruly prisoners to death, hygienic services [like the infirmary and rest rooms will be removed]. [Farajinejad said] to let them dirty themselves [to become] disciplined, and if anybody protests, take him to the empty [torture] room and beat the hell out of him with batons. [Farajinejad said] in case something happens [he] would be held responsible.”

Unfortunately, after 33 years, these brutes have still not realized that the increasing rate of all social crises in the country is due to the undeniable consequence of imposing the inhumane behavior of the mentally and psychologically abnormal regime agents on the society. [The destructive personality traits of the agents] allow them to even deprive prisoners of the right to relieve themselves [in the rest room].

…Velayat-e Faqih agents, although they use privileges like education, still do not value humanity.

I told the guard Hassan, whose expression and tone of speech attempted to express regret so he may be considered innocent on the brutalities, “After 30 of serving as prison guards, [you guys] have not yet learned that violence produces the opposite result. Is imprisoning people and separating them from their families and the society not excruciating enough? Is transferring a prisoner from the public ward to solitary confinement and isolating him/her in a dark and dingy cell lacking a toilet not additional torment? Is using the unsightly and stinky toilets in hall 2, ward 1 of Rajai Shahr prison not torture?

The fact is that Lajavardi, who was a psychopath and a born criminal in the truest sense of the word, employed the most ill people from the Prisons Organization including lunatics like Kolivands, Naderi, Bakhshi, Mirzai, Zanusi, and Khaki, who, without any exception, suffered from severe mental disorders. Even now in their old age, they take pleasure in and are somehow entertained by torturing people and hearing their painful appeals; just like the leaders of the regime whose evil souls are satisfied by the most hideous enemies and oppressors of the people. However, the Farajinejads who rule the psychopaths are a nastier and more ailing sort.

The Turks, Tatars, Arabs, Mongols, or any other race that invaded Iran, transformed after a few years and adapted to the grand Persian culture. However, considering the sinister nature of the Velayat-e Faqih tribe, they have not yet been civilized after 33 years.

Iranians all around the world, unite to defeat the tyrannical mullah regime.

Iran tells US to get out of Syria, whether it wants to or not

Khameini: ‘America Could Not Do Anything’ to Stop Iran from Developing Nuclear Weapons