Posted By: crazydeadon: May 27, 2013In: Arrests, Human Rights
Print Email 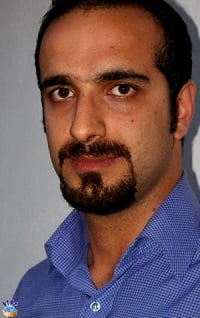 Ashkan Zahabian, student activist in the Green Movement and member of Tahkim-e Vahdat (Student-Alumni Association) was arrested at his parental home this morning Monday May 27th.

According to news provided to CHRR, this morning Security Ministry agents raided the

home of Ashkan Zahabian’s parents, aggressively arrested and transferred him to an undisclosed location. In 2009, Zahabian served as a student volunteer at the Babol campaign headquarters of presidential election candidate, Mehdi Karoubi.

The Kaleme website reports that Ashkan Zahabian, Mashhad Ferdowsi University student barred from continuing his education, was previously detained for a third time in April 2011 when per a summons he showed up at the Sari Intelligence Office. His first arrest was in June 2009 only four days after the contested election results, at a Mazandaran University student protest. He lost consciousness during the violent arrest by plainclothes officials and Intelligence Ministry agents detained him.

In February 2009, Zahadian was banned from continuing his education because of his activism and was expelled from university one term shy of graduating. In November 2009, he was arrested again and the Babol Revolutionary Court sentenced Zahabian to 6 months in prison stemming from his student activism. He was deprived of his right to an attorney and was not allowed to defend himself in court. At Babol’s Matikola Prison, his health deteriorated and he endured solitary confinement while on hunger strike in protest of being held in a facility among criminals, and being denied needed medical treatment.

Karroubi:”Be brave and hold a public trial for us”

Military projects under development are not being unveiled for security reasons