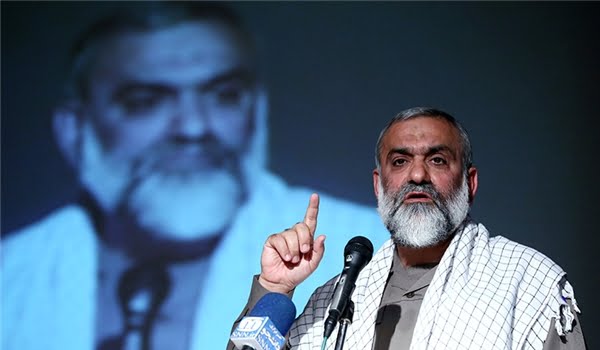 Commander of Basij (volunteer) forces Brigadier General Mohammad Reza Naqdi took the US and certain European states responsible for providing logistics for the terrorist Islamic State of Iraq and the Levant (ISIL) to find an alibi to boost its buildup in the region.

“American’s intangible presence in the region has been a major cause for the creation of the terrorist Daesh (ISIL) group,” Naqdi said, addressing people in a city near Tehran on Tuesday night.

He also condemned the US Congress for approving an aid budget for the ISIL, and said, “The European countries, including France, arm the ISIL and the US and the West’s attempts are not aimed at any goal but getting closer to Iran” borders.

Elsewhere, Naqdi said given the US crimes and meddling in different world states, it has today turned into the most hated country in the world and today people in different states hold rallies against the US president’s visit to their country.

In relevant remarks earlier this month, Secretary of Iran’s Supreme National Security Council (SNSC) Ali Shamkhani took the US and reactionary regional states for supporting the crimes committed by the terrorist ISIL in Iraq and other countries of the region.

“The SNSC secretary said that the US, the regional reactionaries and some other states are supporting the ISIL terrorist group and they seek to create instability in the region and therefore we are witnessing unrests in Syria, Iraq, Lebanon and Egypt,” member of the parliament’s National Security and Foreign Policy Commission Javad Karimi Qoddousi told FNA, quoting Shamkhani as saying in a closed-door parliament meeting in Tehran.

Shamkhani blasted the US and its allies’ attempts to sow discord among the Muslims, and underlined that the regional people’s vigilance can turn this threat into an opportunity, Karimi Qoddousi added.

“Shamkhani said that the political atmosphere in Iraq will not witness much tension from now on and unity and integrity among the Shiite streams, the Sunnis, Kurds and minorities has been established due to their concerns about the ISIL’s actions (in Iraq),” the Iranian MP said.

After the recent terrorist attacks by the ISIL many Iranian officials have blamed the western powers, specially the US, for the crisis in Iraq.

Also in June, Supreme Leader of the Islamic Revolution Ayatollah Seyed Ali Khamenei took the US and other western powers responsible for the current crisis in Iraq, and voiced opposition to any foreign intervention in the Muslim country.

“In Iraq’s issue, the hegemonic western powers, specially the US, are seeking to misuse the ignorance and bias of a number of elements with no decision-making power,” Ayatollah Khamenei said in a meeting with Iran’s Judiciary Chief Sadeq Amoli Larijani and other high-ranking Judiciary officials in Tehran at the time.

The Leader stressed that the enemies aim to deprive the Iraqi nation of their achievements gained after the US forces’ withdrawal from the country, the most important of which, he said, has been a democratic system.

“The US is displeased with the current process of election with the people’s high turnout and election of people’s choices because the US intends to dominate Iraq and bring to power those who obey it.”

Ayatollah Khamenei referred to the US officials’ remarks who are trying to display the conflict in Iraq as a sectarian war, and said, “What has happened in Iraq is not a war between the Shiites and Sunnis and the main elements behind the seditions in Iraq are hostile to the faithful Sunnis and those who believe in Iraq’s independence as much as they are hostile to the Shiites.”

He voiced Iran’s opposition to the foreign intervention in Iraq, and said, “We believe that the Iraqi government and nation and the country’s religious leadership are able to end the sedition and God willing, they will end it.”

Public Flogging of a Senior Teacher for Speaking out