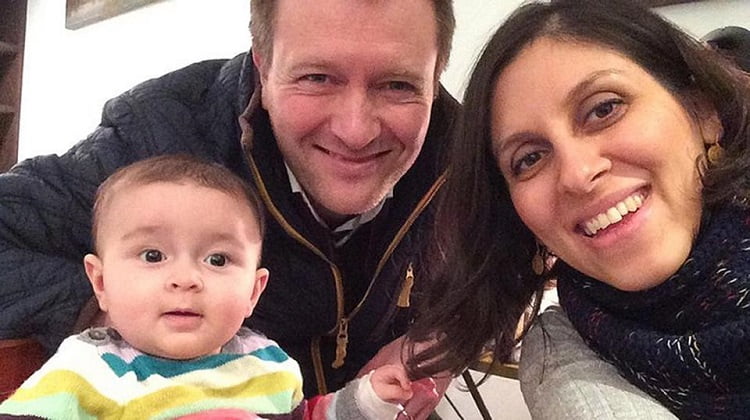 In an open letter to Iran’s foreign minister, the husband of Nazanin Zaghari-Ratcliffe reveals she now has ‘numbness in her legs’ after suffering two panic attacks on her hasty return to jail

CHARITY worker Nazanin Zaghari-Ratcliffe wishes her temporary release from an Iranian jail had never happened, her husband has revealed.

In an open letter to Iran’s foreign minister Mohammad Javad Zarif, Richard Ratcliffe also says his wife has “numbness in her legs” after suffering two panic attacks on her return to prison.

He has now described his wife’s hasty return to jail as “a cruel game” revealing even the prison guards “cried”.
He writes: “She wished she had never been released. She said she felt like one of the radical Islamists‘ captives – as though she had been paraded on the balcony then hidden back away.

“After that call, Nazanin collapsed, the result of two panic attacks. She still has numbness in her legs.”

He said the family feels “held together by sellotape”.

The mum was arrested in April 2016 for “plotting to overthrow the Iranian regime” and was convicted last year, despite her constant denials.

Mr Ratcliffe thanks Mr Zarif for enabling Nazanin to spend a precious few days with her daughter Gabriella,.

However he also points out that his wife was given 10 minutes’ notice of her release, and had to use a passerby’s phone to call her family.

And he says that as Nazanin was being temporarily let go, “her interrogator called her father in to privately warn him that the British Embassy should not visit her, if she wanted to stay safe”.

Mr Ratcliffe earlier told of the family’s agony after his wife was hauled back into an Iranian jail after a too brief reunion with her daughter.

The 39-year-old spent just three days with her four-year-old Gabriella and was given hope there would be an extension to her release from prison.

Earlier she was clearly overjoyed to be out of custody, Richard revealed in an interview with Radio 4 this morning.

He said: “She was euphoric on the first day and the second day at just being out of prison and seeing the family.

“I spoke to her on Skype (it was) the first time I had seen her in more than two years. She had a big grin on her face.”

However, when she headed back to prison her husband said it felt like the family had hit a “brick wall.”