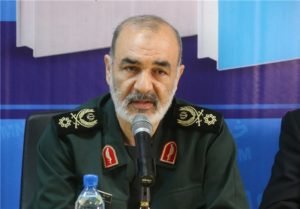 Speaking at a cultural ceremony in Tehran on Wednesday, General Salami referred to the recent defeat of the Daesh (ISIL or ISIS) terrorist group and collapse of its self-proclaimed caliphate in Iraq and Syria, and Iran’s role in the major achievement, saying the US and Zionist regime and their regional allies created Daesh to divide Muslims and confine the extent of the Islamic Revolution’s influence.

“However, what happened was the expansion of the Islamic Revolution’s influence.”

The senior commander added that, with the grace of God, the threats posed against Iran by the enemies have been turned into opportunities by the country.

Stressing that resolving regional and global equations without Iran’s presence is not possible today, he added that the enemy is getting weaker and the country becoming more powerful day after day.

On November 19, the Daesh (ISIL) terrorist group was flushed out of its last stronghold in Syria’s Al-Bukamal. The city’s liberation marked an end to the group’s self-proclaimed caliphate it had declared in 2014.

Speaking on behalf of all commanders and forces fighting against terrorism, thousands of Iranian, Iraqi, Syrian, Lebanese, Afghan, and Pakistani martyrs and those handicapped in defending the life and dignity of Muslims and their sanctities, the top general congratulated Ayatollah Khamenei, the Iranian nation, the people of Iraq and Syria, and all Muslims on the fall of Daesh.

Daesh militants made swift advances in northern and western Iraq over the summer of 2014, after capturing large areas of Syria.

But the timely support by Iran helped Syria and Iraq fight off Daesh. In addition, formation of military units by volunteers in Iraq, known as Hashd al-Shaabi or Popular Mobilization Units, blunted the edge of Daesh offensive and later made the terror group withdraw from the territories it had occupied.