Exclusive: In veiled warning to Iran, U.S. tells Gulf mariners to stay clear of its warships

May 21, 2020 adminayesha Editors' Choice Comments Off on Exclusive: In veiled warning to Iran, U.S. tells Gulf mariners to stay clear of its warships

In an alert that appeared aimed squarely at Iran, the U.S. Navy issued a warning on Tuesday to mariners in the Gulf to stay 100 meters (yards) away from U.S. warships or risk being “interpreted as a threat and subject to lawful defensive measures.” 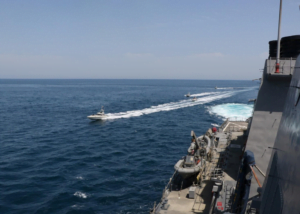 Exclusive: In veiled warning to Iran, U.S. tells Gulf mariners to stay clear of its warships

The notice to mariners, which was first reported by Reuters, follows U.S. President Donald Trump’s threat last month to fire on any Iranian ships that harass Navy vessels.

“Armed vessels approaching within 100 meters of a U.S. naval vessel may be interpreted as a threat,” according to the text of the notice, which can be seen here. (bit.ly/36msOL2)

A U.S. official, speaking on condition of anonymity, said the new notice to mariners was not a change in the U.S. military’s rules of engagement.

The Pentagon has stated that Trump’s threat was meant to underscore the Navy’s right to self-defense.

The Bahrain-based U.S. Naval Forces Central Command said in a statement that its notice was “designed to enhance safety, minimize ambiguity and reduce the risk of miscalculation.”

It follows an incident last month in which 11 Iranian vessels came close to U.S. Navy and Coast Guard ships in the Gulf, in what the U.S. military called “dangerous and provocative” behavior.

At one point, the Iranian vessels came within 10 yards (9 meters) of the U.S. Coast Guard cutter Maui, the U.S. military said.

On 3rd of January a news spread in social media regarding Qasem Soleimani and AbuMahdi Mohandes who has died by a US drone strike near Baghdad Airport and this was the end of their lives. In social media, especially Iranian users, there was a chaotic situation, some called of “the general of... END_OF_DOCUMENT_TOKEN_TO_BE_REPLACED