The trial of an Iranian group charged with planning a terror attack in France is due to open in Belgium, the Asharq Al-Awsat newspaper reported Sunday. 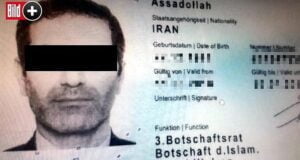 The four Iranians intended to strike a large rally of the Paris-based National Council of Resistance of Iran (NCRI), an Iranian opposition group. The event held in June, 2018 was attended by some 25,000 people, including President Donald Trump’s personal lawyer, former New York City Mayor Rudolph Giuliani, and other close allies of Trump.

The rally took place at Villepinte, a suburb in northeastern Paris near Charles de Gaulle Airport.

The ringleader of the cell, Assadolah Assadi, 49, was an Iranian diplomat in Iraq from 2003 to 2008. He was appointed third secretary at the Iranian embassy in Vienna in 2014, the report said.

According to Belgian state security officials, Assadi acted mostly on behalf of the Iranian government’s “Department 312,” a service of Iran’s Ministry of Intelligence and Security (MOIS) – listed as a terror organization by the European Union.

Assadi received military training in Iran, including the use of explosives, and is alleged to have worked for Iran by collecting information on Iranian opposition members.

Assadi was arrested while on holiday in Germany and handed over to Belgium, where two of his suspected accomplices had been arrested with 500 grams (one lb) of TATP, a highly unstable explosive prone to unintended detonation.

Le Monde reported that Assadi refused to cooperate with the Belgian investigation and warned authorities of possible retaliation by unidentified groups in Iraq, Lebanon, Syria, and Yemen if found guilty.