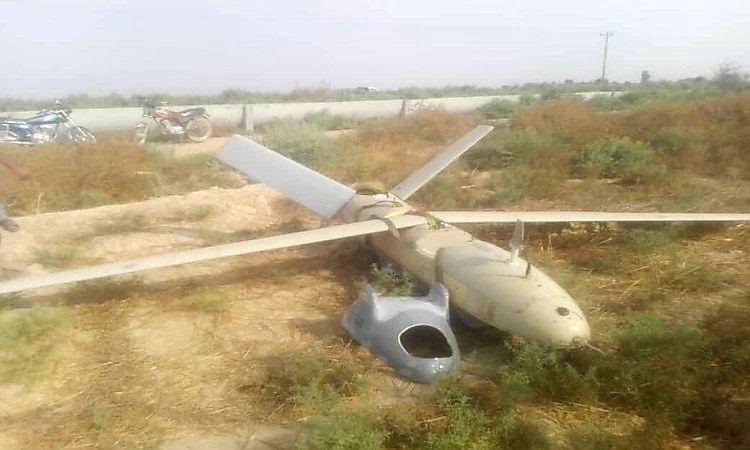 Wednesday November 23, 2019, several  international news agencies, including  the official government news agency, IRNA, reported that ; an unidentified drone crashed in the village of Magrnat, in the Shoaybiyeh section of Shushtar, on Wednesday afternoon.

Commander of resistance mobilization of Shushtar city confirmed this news, telling the IRNA:

this drone has been moved to a safe place to allow for further investigation.

Colonel Hussein Nisiizadeh added: No exact information has been released about the drone and we are waiting for the completion of the review by the team of experts.

The Fars news agency affiliated with the Revolutionary Guards also wrote about it stating:

The governor of Shushtar explained the fall of a drone in the village of Magrnat.

Hossein Panbeh  Danehpour, in an interview with Fars, regarding the fall of this drone, stated:

This unidentified drone landed  by the Maalek forces control,  in the village of Magranat,  Dou Sho’ibiyyah Shushtar , and it is currently protected by these forces.

There is no official photo of the drone crash but several unofficial and local sources have reported that the drone  was armed and it bears  no logo.

The next  day, while all the news agencies, including the Tasnim and Fars news agencies, also wrote about the crash of an unidentified drone Fars News Agency wrote:

Yesterday, an unmanned aerial vehicle belonging to the Revolutionary Guards Corps air force made an emergency landing  near the village of Magranat in the Shoaybiyeh district of Shushtar province in Khuzestan province.

This was an Iranian UAV and the rumors that it was targeted and overthrown are untrue.

It is clear that this UAV has no sign and so on. Even local Revolutionary Guards forces have failed to recognize that the UAV belonged to the IRGC, but why ?

A source from the Quds Force of the Revolutionary Guards sent information to “Iran briefing”, which indicates that the UAV was prepared to attack the US consulate in “Basra” but in Shushtar, it fell out of the orbit and crashed.

This can be some kind of confirmation of the information received  that UAV was going on a military mission overseas and, because of the Revolutionary Guards’ efforts to not be identified, was flying without any identification marks.

Iranian ‘bomb plot’ could have severe consequences for Khamenei

Son of senior cleric sentenced to four years in prison

A Kurdish civilian was killed by IRGC forces