Aug 08, 2019 IRGC News, Politics, Slider Comments Off on How Russia is deepening military ties with Iran to counter the US

Russia and Iran are deepening their military ties in a joint challenge to perceived US hegemony in the Middle East. The Russian Defense Ministry and the General Staff of the Iranian Armed Forces signed a memorandum of understanding that seeks to expand military ties between the two countries on Monday during Iranian Navy Commander Hossein Khanzadi’s three-day visit to St. Petersburg. 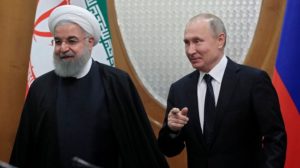 “This is the first memorandum of understanding of this kind, and it may be considered a turning point in the relations of Tehran in Moscow along the defense trajectory,” Khanzadi said.

Why it matters: The memorandum is not legally binding and does not burden either party with additional “allied commitments.” However, it is important in at least two ways.

The first is timing. Coming amid numerous reports of growing tensions between Russian and pro-Iranian forces in Syria, the memorandum sends an important signal that regardless of their disagreements, both Russia and Iran have come to appreciate their political and military partnership and now seek to project it into other areas, including maritime security.

Second, with Iranian tensions with the United States and Arab nations on the rise, collaborating with Russia over security of its shoreline may provide Iran with a feeling of safety.

While the memorandum itself is of little operational significance and more of a political gesture, what may follow is a bilateral alliance to protect against a possible American assault on Iran. Some even see the makings of a Russian-Iranian version of the anti-access/area denial (A2/AD) strategy used by China to try to keep the United States out of the western Pacific.

On 3rd of January a news spread in social media regarding Qasem Soleimani and AbuMahdi Mohandes who has died by a US drone strike near Baghdad Airport and this was the end of their lives. In social media, especially Iranian users, there was a chaotic situation, some called of “the general of... END_OF_DOCUMENT_TOKEN_TO_BE_REPLACED