Iran’s failure to prevent violence against its own people by security forces, or to hold senior officials to account, will not dissuade protesters, said the president of the International American Council following the release of a new report by Human Rights Watch (HRW).Iran expert 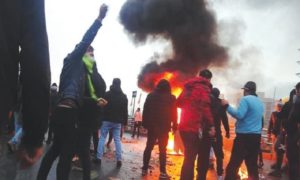 “Straightforward repression and the use of brute force is something that Iranian people have been enduring for a long time, and they can be expected to continue pushing back against it with extraordinary resilience,” Dr. Majid Rafizadeh, who is also a political scientist at Harvard University, told Arab News.

“This was made clear during the previous nationwide uprising, when dozens of peaceful protesters were killed, either by Islamic Revolutionary Guard Corps (IRGC) gunfire or by torturous interrogations following their arrest. Yet the uprising continued for some time,” he said.

“The US and Europe have the capabilities to provide large segments of the Iranian population with tools that would help them to go on organizing against the regime and countering the IRGC’s efforts to suppress the population.”

HRW said Iran had failed to hold its security forces accountable for violence, including unlawful lethal force against civilians, during mass demonstrations that broke out in November 2019.

Tehran, it said, had also yet to reveal the number of people killed, injured or arrested during the protests. HRW urged the UN Human Rights Council to take action against the regime.

Amnesty International said at least 304 people had been killed by security forces. HRW reported Iranian politician Hossein Naghavi Hosseini as saying as many as 7,000 people had been detained.

Families of victims, it added, had been warned and in some cases threatened by the authorities not to talk to the media or to try to hold public protests or commemorations on behalf of their relatives.

Iran Can’t Hide Its Coronavirus Explosion, But It’s Trying Hard—and Putting the World in Danger Who Is Abdulaziz Al-Mohammadavi, the New Head of Iran-Backed Militias in Iran?

On 3rd of January a news spread in social media regarding Qasem Soleimani and AbuMahdi Mohandes who has died by a US drone strike near Baghdad Airport and this was the end of their lives. In social media, especially Iranian users, there was a chaotic situation, some called of “the general of... END_OF_DOCUMENT_TOKEN_TO_BE_REPLACED