Jul 03, 2019 Basij, IRGC, IRGC Military Branches, IRGC News, Politic, Slider Comments Off on Iran is opening a new regional front in Iraq, the US must act

The US must act after Iran opened a new front in its regional war, exploiting American weakness in Iraq to use the country as a base to target the Kingdom of Saudi Arabia and threaten US interests in the region 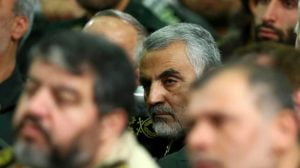 US government officials have concluded that the May 14 drone attack on the east-west Saudi pipeline was launched from southern Iraq, having previously identified Yemen as the launch site.
Despite calls from the Iraqi government to disband, several Iranian-backed militias are active in southern Iraq. Iran has equipped these militias with the same weaponized UAV strike capability as its Houthi allies in Yemen.
According to the US government, the May 14 drone attack was likely launched by Kata’ib Hezbollah, an Iraqi militia and designated terrorist group created, funded, and directed by the Islamic Revolutionary Guards – Quds Force (IRGC-QF). The attack therefore means that Iranian proxies have attacked Saudi Arabia, a key US ally, from two different fronts.
The ’s ability to carry out proxy attacks against a US ally from Iraq, another supposed US ally, highlights America’s failed strategy in Baghdad. As a result of US and Saudi pressure

Senior Iraqi politicians will not dare challenge the militia leaders, especially Qassem SolIRGCeimani, the commander of the IRGC-QF. Iraqi President Barham Salih, Prime Minister Adil Abdul Mahdi, and Speaker of the Council of Representatives of Iraq Mohamed al-Halbousi are all likeable, but they are not an effective group to oppose Iran’s malign influence.

Instead, the Iraqi government has been compromised by Iranian influence and allows senior Iranian figures to freely operate in Iraqi territory. Qassem Soleimani, the commander of the IRGC-QF, has repeatedly violated UNSCR 2231 by travelling to Iraq .

IRGC chief: Iran destroyed Washington’s fictitious grandeur in world Why the US should not attack Iran: It's what the Islamic Guards want and need

On 3rd of January a news spread in social media regarding Qasem Soleimani and AbuMahdi Mohandes who has died by a US drone strike near Baghdad Airport and this was the end of their lives. In social media, especially Iranian users, there was a chaotic situation, some called of “the general of... END_OF_DOCUMENT_TOKEN_TO_BE_REPLACED