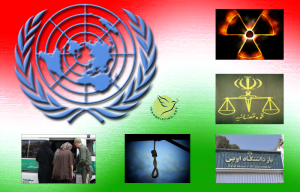 Interestingly, the sole country that defended the Iranian regime was representative of the Syrian regime who praised the human rights situation in Iran and asked Iran to continue “its efforts to expose negative impacts of terrorism and one-sided oppressive measures.”

In this meeting, Larijani defended execution of Reyhaneh Jabbari and said the execution was implemented according to the law. Ms. Reyhaneh Jabbari, 26-year old student and designer, was executed on October 25 after spending 7.5 years in prison on the charge of killing in self-defense a former intelligence agent who tried to insult her. The execution was carried out despite numerous calls by international human rights and women’s rights organizations on Iran to half the execution.

Each member states of the UN Human Rights Council emphasized on one topic due to a short time they were given to speak.

The representative of the U.S. said numerous reports of continued intimidation and harassment of religious minorities in Iran released; Journalists are detained or prevented from continuing their work. He called for release of Washington Post reporter, Jason Rezaiian, who was arrested in June in Iran.

Representative of Britain expressed deep concern regarding “increase in the number of executions in Iran in the past year,” and called for immediate halt in execution of juveniles.

Representative of Canada, while criticizing the human rights situation in Iran, noted the case of Reyhaneh Jabbari and expressed regret that the Islamic Republic does not respect the rule of law and due process.

Representatives of Australia and France also criticized the human rights situation in Iran and called for improvement of the human rights of Baha’is in Iran. They called on Iran to put a moratorium on death penalty, particularly execution of juveniles.

Representative of Sweden said human rights violations in Iran is serious. He pointed out discrimination against ethnic and religious minorities including Baha’is and called on Iranian regime to lift restrictions on internet and social networks and remove pressure on journalists and the press.

Representative of Switzerland expressed concern regarding executions in Iran particularly the case of Reyhaneh Jabbari and called for the release of all of those who were arrested for holding peaceful demonstration.

Representative of Uruguay called for elimination of death penalty.

Other countries called for cooperation of Iranian regime with international human rights mechanisms and called for moratorium on death penalty. They also called on Iran to stop execution of juveniles and demanded equal rights for ethnic and religious minorities.