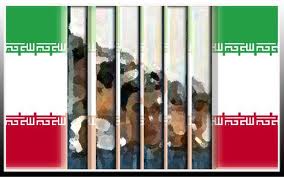 Shirin Ebadi, Nobel Peace Laureate, International Federation for Human Rights (FIDH), and the Iranian League for the Defense of Human Rights (LDDHI) said in a joint statement today: “Conditions of prisoners in Iran are deteriorating by the day. Political prisoners and prisoners of conscience suffer a series of torture and other ill treatment during pre-trial detention, lack access to their lawyers and families and due process, and are subsequently tried under conditions far from international standards of fair trials, on charges related to their professional work, human rights work, freedom of expression, assembly and association, and other legitimate rights recognized by international human rights treaties, to which the Islamic Republic of Iran is state party”.

Following the trials, often lasting only a few minutes, political prisoners receive extremely unfair sentences that are occasionally illegal even under the Iranian highly flawed laws. A well-known example is ‘imprisonment in exile’ in remote Iranian prisons, which does not exist in any Iranian law and effectively punishes both the prisoners and their families.

Families of political prisoners frequently face other forms of harassment. Occasionally, some family members are detained or sentenced to imprisonment merely for publicizing their prisoner’s case or pursuing their fate with the judicial authorities. On other occasions, security agents meddle in the private sphere of prisoner’s family, e.g. advising wives to complain against their husbands or to divorce them.

Later on, many political prisoners, while serving their sentences, face further harassment frequently when new cooked up charges are brought against them intended to prolong their imprisonment before their prison term runs out or even after their term has run out. Occasionally, political prisoners and prisoners of conscience are exiled to other remote prisons, even though their sentence does not provide for ‘imprisonment in exile’.

Many prisoners of conscience are in pressing need of proper medical care and treatment, which is not available inside the prisons, but the authorities frequently refuse to provide the mandatory health care as required both under the international treaties and the Prisons Regulations of Iran.

Shirin Ebadi, FIDH and LDDHI said: “We have consistently drawn the attention of the international community to the conditions of political prisoners in Iran, including in the joint FIDH-LDDHI report, Iran: Suppression of freedom, prison, torture, execution… A state policy of repression. We draw the attention of the international community once again to the following prisoners of conscience who have been recently subjected to ill treatment, but wish to emphasise that the list represents only a fraction of ill-treated prisoners and it is far from being conclusive and comprehensive“.

▪   Ms. Nargess Mohammadi was taken to hospital from prison on 9 July 2012 after she suffered severe injury to her face when she fell. She suffers from muscular paralysis and convulsion. Her family had no news of her for 12 days until she contacted them around 22 July, after she had been returned to prison. She said that she had even lost her eyesight for five days. Despite the presence of prison guards around her, she had been handcuffed to her bed every night while sleeping. Ms. Mohammadi is vice president of Defenders of Human Rights Centre (DHRC) and is serving a 6-year imprisonment sentence on charges related to her human rights work. The authorities, who have illegally transferred her to Zanjan prison where she is held with common criminals, finally granted her sick leave today, 31 July, to pursue her treatment out of prison. It is not, however, clear how long her leave will last.

▪   Ms. Zaynab Jalalian suffers from intestinal bleeding and eyesight problems caused by severe torture during pre-trial interrogations. She is a Kurdish political prisoner who is serving life imprisonment in Sanandaj prison.

▪   Ms. Kobra Banazadeh Amirkhizi and Ms. Sedigheh Moradi, two political prisoners, were transferred to Gharachak prison on 11 July, where common criminals are held under extremely non-standard conditions. They are serving prison sentences of 5 years and 10 years in internal exile, respectively, on charges said to be related to their family ties to opposition members abroad.

▪   Ms. Nasrin Sotudeh, human rights lawyer and DHRC member, is serving a sentence of 6 years in Evin prison. The authorities banned her husband and even her 12-year-old daughter from travelling abroad, according to information received on 11 July.

▪   Ms. Hanieh Farshi Shotorban, blogger, who is serving 7 years in Evin prison, was refused medical care and medication by the prison clinic for her kidney and bladder problems, in mid-July.

▪   Mohammad Seifzadeh suffers from acute health problems, including severe pain in his legs and knees, his back and spinal cord, arthritis of the neck and hands, and heart ailment. He has been denied medical care since last January. Mr. Seifzadeh, lawyer and a founding member of DHRC, is serving a two-year imprisonment sentence in Evin prison on charges related to his human rights work and is facing new charges brought against him for writing open critical letters.

▪   Abdolfattah Soltani, who suffers from anaemia and other health problems, was scheduled to be taken to hospital in the final week of June, but his transfer was called off upon the insistence of the authorities to handcuff him. Mr. Soltani, lawyer and a founding member of DHRC, has been detained since September 2011 and was recently sentenced to 13 years imprisonment in internal exile in the remote city of Borazjan for his human rights work. If exiled to Borazjan, his family will have to travel 1,200 km each way every time for a short prison visit.

▪   Shahrokh Zamani, a trade unionist, was sent to the Quarantine Section of Yazd prison on 29 July, a week after his open letter was published, in which he had criticised the terrible conditions of Yazd prison. Having been sentenced to 11 years imprisonment on charges related to his efforts to establish an independent workers union, he was ‘exiled’ to Yazd prison from his domicile city of Tabriz in north-west Iran in May 2012, even though his sentence does not provide for ‘imprisonment in exile’.

▪   Mohsammad Sadiq Kaboudvand recently went on a long hunger strike demanding to visit his son, who suffers from an incurable disease. He finally ended his protest on 24 July after 59 days. Mr. Kaboudvand, president of Human Rights Organisation of Kurdistan, is serving an imprisonment sentence of 10 years and six months on charges related to his human rights work, and has suffered three strokes and at least one heart attack in prison, prostate and kidney problems, and has had periods of dizziness and unconsciousness. However, he has not had consistent access to all necessary medical care.

▪   Bahman Ahmadi Amou’i, an economic journalist, is serving a five-year imprisonment. In mid-June 2012, when political prisoners in Evin prison’s Section 350 organised a ceremony to commemorate the anniversary of demise of the late political prisoner Hoda Saber, prison officials sent him and several prisoners to solitary confinement. He was subsequently banished to the remote Rajaishahr prison. There, he was insulted and confined to solitary cells for nearly 20 days. He remains in the same prison, even though his sentence does not provide for ‘imprisonment in exile.’

▪   Anvar Hossein Panahi, a Kurdish civil activist, who is serving 16 years in Sanandaj prison, suffers from kidney and intestine infection. Reports detailing his pre-trial tortures indicate that his ribs were broken and he was forced to stay naked in prison yard in cold winter nights. One of his brothers was killed under dubious circumstances while he was carrying a petition proclaiming his brother’s innocence to submit to judicial authorities. His other brother was detained several times, lost his eyesight by 50% under torture and then sentenced to one year imprisonment.

▪   Abolfazl Ghadiani, political activist, suffers from heart ailment and has undergone surgery several times. Prison officers reportedly took him to hospital for medical examination yesterday (30 July) after beating and handcuffing him. He refused to be examined in protest and was returned to prison. In mid-July, he was denied sick leave, which the Medical Commission had recommended. Mr. Ghadiani was due to be released in late November 2011 after serving his one-year imprisonment sentence, but the authorities brought new charges against him for ’insults against the Supreme Leader and the president’ and sentenced him to one more year imprisonment. He is facing new charges.

▪   Mostafa Tajzadeh, former deputy interior minister, is serving a sentence of 6 years and suffers from lumbar disc, arthritis of the neck and skin disease and problems of eyesight. The authorities refuse to transfer him to public sections of the prison.

▪   Kurosh Kuhkan (Kohkan), political activist, is serving a prison sentence of three and a half years. He suffered right knee meniscus tear under torture. His knee failed to function in mid-July as a result of which he fell down the stairs. Prison officials failed to take timely action for his treatment.

▪   Kayvan Samimi-Behbahani, veteran journalist and human rights defender, is serving a six-year prison sentence in the remote Rajaishahr prison and suffers from a risky liver ailment.

▪   Abdollah Momeni, political activist, is serving a sentence of four years and 11 months and suffers from kidney ailment, skin disease and hearing problem as a result of damage to his eardrums under torture. He is facing new charges

▪   Ghassem Sholeh Saadi, defence lawyer, is serving a sentence of 1.5 years and suffers from damages to his spinal cord reportedly caused under torture during his previous prison term. He is facing new charges.

▪   Hamed Rouhinejad, student, is serving a sentence of 10 years in internal exile in Zanjan prison, and suffers from Multiple Sclerosis as a result of which he has been reported to have problems of eyesight and hearing and one of his hands is not functioning.

▪   Mohammad Hossein Kazemeyni Borujerdi, dissident cleric is serving an 11-year prison sentence in Evin prison, and has been reported to suffer from Parkinson’s disease, diabetes, high blood pressure, kidney and heart problems and loss of vision in one of his eyes.

▪   Saleh Kohandel, political prisoner, is serving a sentence of 10 years in the remote Rajaishahr prison and suffers from severe irregularity of blood platelet count.

▪   Siamak Ighani, a follower of the Baha’i faith, is serving a sentence of three years in Semnan prison and suffers from lung problems and rheumatism.

▪   Ja’afar Eghdami, political prisoner, is serving a sentence of 10 years in the remote Rajaishahr prison, and suffers from a neurotic syndrome in his waist and leg that might paralyse him completely.

▪   Ebrahim (Nader) Babaei, political prisoner, is serving a sentence of six years in the remote Rajaishahr prison and suffers from heart ailment and lumbar disc.

Karim Lahidji, vice-president of the International Federation for Human Rights (FIDH) and president of the Iranian League for the Defence of Human Rights (LDDHI), said today:“Political prisoners and prisoners of conscience are hostages held by the Iranian authorities, who exert as much pressure as possible on them and their families. The authorities consistently violate the provisions of the ‘Body of Principles for the Protection of All Persons under Any Form of Detention or Imprisonment’ adopted by the UN General Assembly in December 1988 and the’ Standard Minimum Rules for the Treatment of Prisoners’ adopted by UN Economic and Social Council on 13 May 1977. The authorities refuse to provide proper and regular medical treatment to political prisoners, deny all their other rights and subject them to all kinds of torture, inhuman punishments and other ill treatment. They even punish the families of political prisoners.”