Iranian President Hassan Rouhani told world leaders Wednesday that there would be no negotiations with the United States as long as economic sanctions remained in effect. 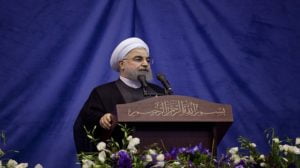 “We once negotiated under sanctions. We will not do so again. Halt the sanctions and return to your commitments so the dialogue may reopen,” he said at the U.N. General Assembly.

The U.S. imposed measures targeting Iran’s key oil industry after withdrawing last year from the 2015 agreement that limited Iran’s nuclear program. The Trump administration said that deal between Iran and world powers did not do enough to prevent Tehran from developing nuclear weapons or engaging in other perceived malign behaviors.

Tehran has since surpassed some of the 2015 agreement’s limitations, arguing that the other signatories are not living up to their part of the agreement, particularly ensuring it gets sanctions relief.

“For one year, Iran remained fully faithful to all of its nuclear commitments in the JCPOA,” Rouhani said, referring to the nuclear deal by its initialism. “We provided Europe with the opportunity to fulfill its 11 commitments made to compensate for the U.S. withdrawal. However, unfortunately, we only heard beautiful words, while witnessing no effective measures.”

European efforts to keep Iran in compliance with the deal by easing some of its economic pain through a special trade mechanism have not provided the scope of relief Tehran seeks.

“We will continue to work together with the unity of purpose to try and preserve it, without ignoring the challenges,” European Union foreign policy chief Federica Mogherini said of the nuclear deal.

“As you know, the agreement has two pillars — the nuclear commitment and the economic side that is linked to the sanctions lifting. On both elements, there is full determination to try and preserve the agreement,” she told reporters at the United Nations after a meeting Wednesday morning with the remaining participants of the nuclear deal.

Read more at: The Jewish Voice