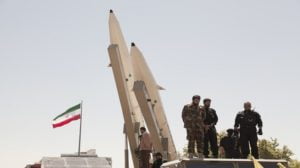 The Iranian regime’s elite forces have targeted U.S. troops and citizens overseas, raised financing, manpower and resources for terrorist organizations that they have propped up around the world.

Increasingly, the IRGC has played a crucial role Iran’s role to expand its influence in the Western Hemisphere and geographically position itself closer to the United States. The terrorist group is also an integral part of the Iranian government’s operations against our closest ally in the Middle East, Israel, and the group has been actively involved in training terrorist organizations and the Taliban in Afghanistan to target and kill American troops.

The Trump administration’s unprecedented step will put pressure on the Iranian regime and nations that attempt to evade sanctions, say experts.

“This unprecedented step, led by the Department of State, recognizes the reality that Iran is not only a State Sponsor of Terrorism, but that the IRGC actively participates in, finances, and promotes terrorism as a tool of statecraft,” President Trump said Monday, in a White House statement. “The IRGC is the Iranian government’s primary means of directing and implementing its global terrorist campaign.”

However, some intelligence officials say the Trump administration needs to go one step further, designating individual leaders of the IRGC and Iranian intelligence terrorists (I have more on this below).

No Debate: IRGC Is a Terrorist Organization

Iran is the largest state-sponsor of terror in the world and the terrorist designation is a first step in curtailing the regime’s efforts worldwide. Ranking member of the House Intelligence Committee Rep. Devin Nunes, R-Calif., has long stressed that the IRGC is a threat to global security. Further, the terrorist organization provides resources, training and financing to Iraqi and Afghanistan terrorist networks that have killed U.S. troops overseas.

Nunes told SaraACarter.com that he supports the Trump Administration’s decision, as it designates anyone who deals with the IRGC at risk of facing criminal charges for aiding or abetting a terrorist group.

“Iran’s Revolutionary Guard are unquestionably a foreign terrorist organization – I don’t even see how it’s debatable,” he added.

It isn’t debatable, according to Jim Phillips, a senior research fellow for Middle Eastern affairs at The Heritage Foundation.

The impact of Revolutionary Guard’s suppression of citizen journalists