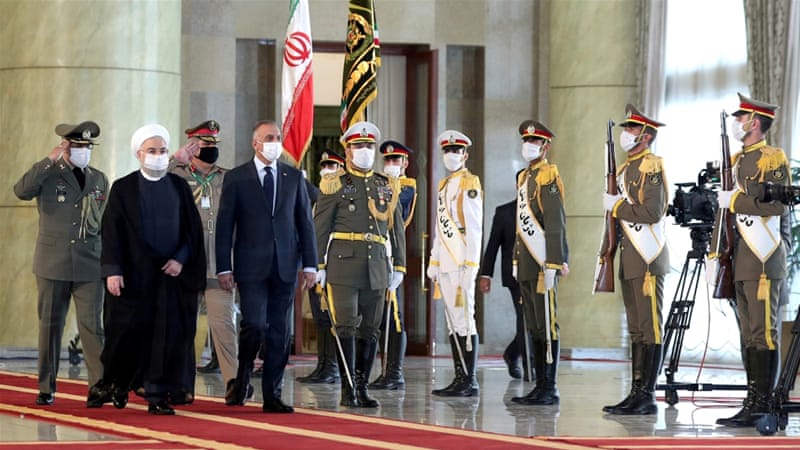 Iraqi Prime Minister Mustafa al-Kadhimi said on a trip to Tehran on Tuesday that Iraq would not allow any aggression against Iran coming from its territory.

Speaking at a news conference alongside Iranian President Hassan Rouhani, al-Kadhimi alluded to Iraq’s concern not to become a battlefield between arch-enemies Iran and the United States.

The Iraqi prime minister faces a tough balancing act between Tehran and Washington, which have come close to open conflict in the region, particularly on Iraqi soil, over the past year.

At home, al-Kadhimi faces increasing pressure from Iran-aligned groups that perceive him as siding with the US, because he has indicated he wants to curb the power of Iranian-backed militias and political parties.

“The people of Iraq want good relations with the Islamic Republic of Iran based on the principle of non-interference in the internal affairs of both countries,” he told the news conference, carried live by Iranian state television.

“Iraq is a country that won’t allow any aggression or challenge to Iran from its territory.”

Al-Kadhimi rose to the premiership in May after serving as head of Iraq’s National Intelligence Service for nearly four years. He formed close ties to Tehran, Washington and Riyadh during that time, prompting speculation he could serve as a rare mediator among the capitals.

In his first two months in office, Iraqi security forces carried out two arrest raids against militias but most of those detained were quickly released.