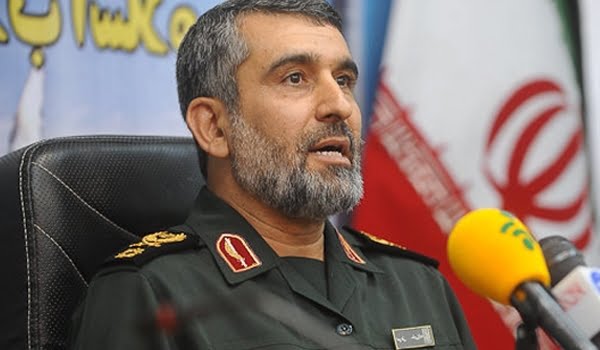 Commander of the Islamic Revolution Guards Corps (IRGC) Aerospace Force Brigadier General Amir Ali Hajizadeh reiterated the Iranian Armed Forces’ full preparedness to defend the country, and said Tehran will give a crushing and deadly response to any aggression by the Zionist regime.

“The Zionist regime might have a decision to make an aggression against Iran, but it will certainly come to the conclusion that it has taken an immature decision after studying the outcomes and consequences and the Islamic Republic of Iran’s much powerful reaction,” Hajizadeh said, addressing IRGC cadets in the Northeastern city of Mashhad on Wednesday.

He underlined Iran’s high preparedness for any possible attack against the country, and said, “The Zionist regime officials have many times raised threats against Iran, but they are well aware that the price of any attack on Iran and our response will be so heavy for them that even its imagination is like a deadly nightmare for them.”

“The Islamic Republic will respond to any threat at the same level,” Hajizadeh said.

Iranian officials, including Defense Minister Brigadier General Hossein Dehqan, have always reiterated Iran’s full preparedness to confront any possible enemy threat and aggression, and said that the country’s military forces will give a swift and decisive response to any US or Israeli threat.

“The westerners are angry at us and they use the nuclear issue as a worn-out pretext to leave an impact on our nation,” Dehqan said in February.

“Certainly, our nation will not be affected and is fully ready to confront any arrogant move of the US or its little child, Israel,” he underlined.

The Iranian minister advised the enemies to see the Iranian nation’s resolve, understand its greatness and shift their path to move on the right path.