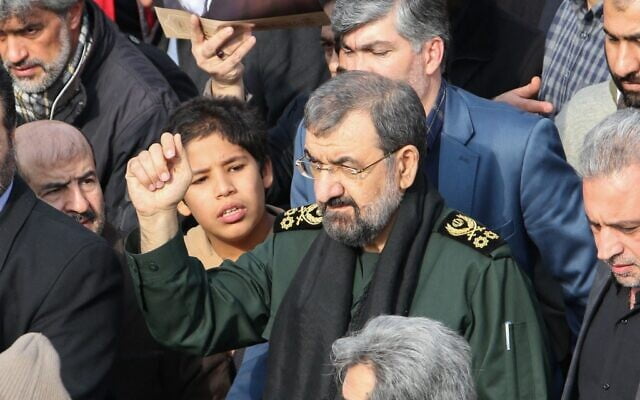 (FILES) In this file photo taken on January 3, 2020, Iranian former chief of the Revolutionary Guards Mohsen Rezai takes part in an anti-US demonstration in the capital Tehran, following the killing of Iranian Revolutionary Guards Major General Qasem Soleimani in a US strike on his convoy at Baghdad international airport. - The high number of presidential hopefuls from the ranks of the military for Iran's June 18 election is stirring unease over a possible militarisation of the Islamic republic. (Photo by ATTA KENARE / AFP)

A string of military figures on the list of Iranian presidential hopefuls is stirring unease over a possible further militarization of the Islamic Republic’s politics.

Registration for the June 18 poll runs from Tuesday to Saturday, after which names will be handed to the conservative-dominated Guardian Council for vetting.

State news agency IRNA has pointed to “the longest-ever list [of potential candidates] in a presidential election with a military background.”

The participation of candidates with a military background “is not new,” said Ahmad Zeidabadi, an independent journalist in Tehran.

However, none of them were serving members of military forces during their candidacy, said Habib Torkashvand, a journalist with the Fars news agency which is close to Iran’s ultra-conservatives.

This time around, hopefuls include Saeed Mohammad, an adviser to Guards commander Major General Hossein Salami, and former oil minister Admiral Rostam Ghasemi, an economic affairs aide to the head of the Guards’ elite Quds force.

Two members of Iran’s Revolutionary Guard Corps — parliament speaker Mohammad Bagher Ghalibaf and his predecessor Ali Larijani — have both run for president in the past.

So has Admiral Ali Shamkhani, secretary-general of the Supreme National Security Council.

The three have been touted as possible candidates for this year’s race too, although they have yet to declare their intentions.

‘No chance of militarization’

Moderate daily Jomhouri-e Eslami has warned the election of a “military figure to head the government” could have “negative consequences” for the country.

Read the complete article at: Times of Israel