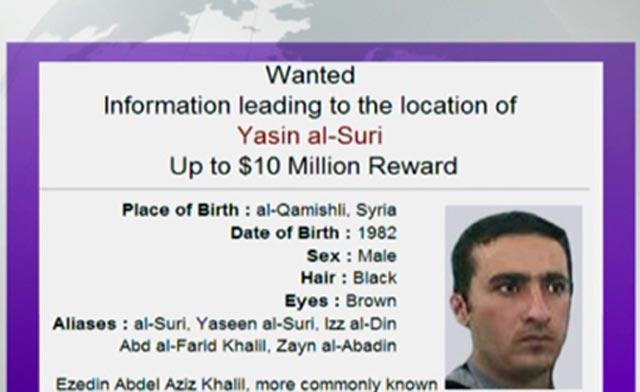 A federal judge has signed a default judgment finding Iran, Taliban and al-Qaeda liable in the Sept. 11, 2001 terrorist attacks.

Judge George Daniels in Manhattan signed the judgment Thursday, a week after hearing testimony in the 10-year-old case. The signed ruling, which he promised last week, came in a $100 billion lawsuit brought by family members of victims of the attacks. He directed a magistrate judge to preside over remaining issues, including fixing compensatory and punitive damages.

Daniels signed findings of fact saying the plaintiffs had established that the Sept. 11 attacks in 2001 were caused by the support the defendants provided to Qaeda. It also said Iran continues to provide material support and resources to Qaeda by providing a safe haven for al-Qaeda leadership and rank-and-file Qaeda members.

Meanwhile, the United States on Thursday offered a $10 million reward for information leading to the arrest of a key Qaeda fundraiser, who is said to be a Syrian operating from Iran.

The reward for Ezedin Abdel Aziz Khalil marks the first time that a “terrorist financier” has been targeted in such a way, said Robert Hartung, assistant director for threat investigations with the State Department.

According to U.S. officials, the man also known as Yacine al-Suri was born in Syria in 1982.

He was put on a U.S. Treasury Department blacklist in July when he was described as a high-level Qaeda “facilitator.”

The Treasury statement said then that Khalil has operated from inside Iran since 2005 “under an agreement between Qaeda and the Iranian government.”

He moves Qaeda money and recruits from across the Middle East through Iran and then to Pakistan “for the benefit of Qaeda senior leaders,” it added.

“Al-Suri is an important fundraiser for Qaeda and has collected money from donors and fundraisers throughout the Persian Gulf region,” the State Department said Thursday in a statement.

“He has funneled significant amounts of money via Iran to Qaeda’s leadership in Afghanistan and Iraq.

“Working with the Iranian government, al-Suri also arranges the release of Qaeda personnel from Iranian prisons. When Qaeda operatives are released, the Iranian government transfers them to the custody of al-Suri, who then coordinates their travel to Pakistan,” the State Department added.

The $10 million was posted as part of the program “Rewards for Justice,” set up in 1984, with the aim of hunting down suspects wanted for terror acts against the United States.

Khalil is the only individual based in Iran who has been targeted under the program which according to the State Department has already handed out more than $100 million in exchange for information about wanted suspects.

However, the U.S. administration refuses to discuss the details of the information it has received or to openly identify those arrested, saying it needs to protect its informants.

Two cases have however come to light − the sons of former Iraqi dictator Saddam Hussein, Uday and Qusay, who were found in July 2003 in Mosul and killed by U.S. forces trying to arrest them.

The current head of Qaeda, Ayman al-Zawahiri, has the highest bounty on his head of $25 million.

Iran’s Governing Structure Is Crippled in Resolving Its Crises

At least 16 students of Sharif university have been arrested